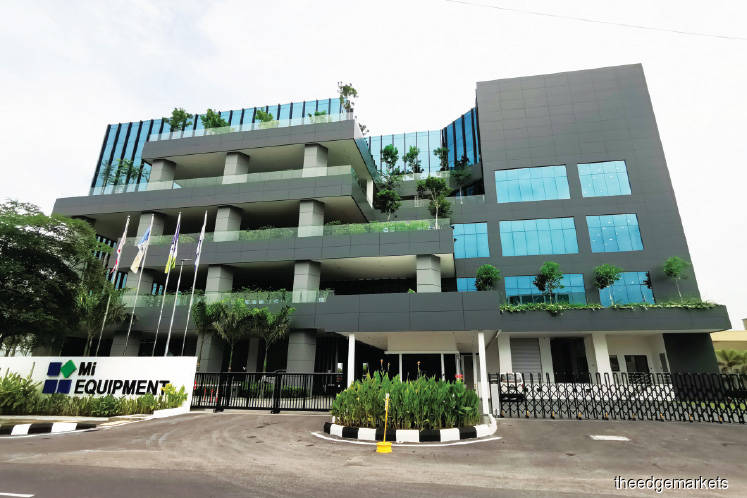 Mi Technovation’s plant in Bayan Lepas. The group aims to be a player with multiple products across multiple industries by 2023. KUALA LUMPUR: Mi Technovation Bhd — formerly known as Mi Equipment Holdings Bhd — is seeking to reduce its dependency on the semiconductor industry. This is because its semiconductor equipment business unit — Mi Equipment — is seasonal and affected by the cyclical nature of the industry.

He added that the group, based in Bayan Lepas, Penang, wants to smoothen out cyclicality through its newly incorporated subsidiaries, Mi Autobotics and Mi Components.

A new RM30 million plant is being built on the mainland in Batu Kawan — catering to both units — and is expected to be completed by the first quarter of next year, Oh told The Edge Financial Daily.

Mi Automotics is a business segment that focuses on developing and building advanced automation and robotic solutions with artificial intelligence for the manufacturing sector in the Industry 4.0 era, while Mi Components is involved in the metal components manufacturing business.

Oh said the two new business units would enable Mi Technovation to widen its customer base beyond the semiconductor industry. They are expected to start contributing to the group’s revenue and earnings in 2020.

Optimistic that 2020 would be a better year

Oh is unfazed by the uncertainty in the semiconductor industry as a result of the global trade tensions.

“While the semiconductor industry in general is experiencing a slowdown in 2019, the advanced wafer level packaging segment is still growing, and this augurs well for us,” he said.

Mi Technovation, via Mi Equipment, is primarily involved in the design, development, manufacturing and sale of wafer level chip scale package and sorting machines with inspection and testing capabilities for the semiconductor industry.

Oh said the second half of this year had started to “look rosier” with the increased activities as industry players are seen moving ahead to make capital expenditure (capex) decisions factoring in worst-case scenarios.

“We are optimistic that 2020 will be even better with capex budgets increasing for the industry,” he said, citing the action of Taiwan Semiconductor Manufacturing Company (TSMC), the world’s largest contract chipmaker.

“We observed improvements in the capex investment quantum of our key customers in the second half of 2019 (2H19) which will give us the opportunity to register better performance in 2H19 or otherwise early 2020, depending on revenue recognition due to timing of billing and shipment,” said Oh.

He is therefore hopeful that Mi Technovation will record a better performance in 2019 provided the market does not experience further complications or impediments.

Additionally, the group has set a gross profit margin target of at least 40% and profit before tax margin at a minimum of 20%, amid its aggressive expansion plans.

Along with its new plant in Bayan Lepas that is up and running since June, Oh said five series of machines have been commercialised. The group is now working with customers to qualify its “new series and enhanced models to garner success in 2020”.

The Bayan Lepas plant, catering to Mi Equipment on which RM65 million has been spent for the construction, has expanded the group’s production capacity by nearly four-fold to 45 units per month.

Mi Technovation’s shares closed at RM2.45 last Friday, a significant 73% jump since its listing on the Main Market of Bursa Malaysia in June 2018. This brings its market capitalisation to RM1.22 billion.

The stock hit an all-time high of RM3.27 within three months of its listing, a premium of 130% over its initial public offering price of RM1.45.

According to Bloomberg, there are three research houses tracking the stock, two with “buy” calls and one with a “neutral” rating, with target prices ranging from RM1.87 to RM2.40.

R&D needed to be in the forefront

Additionally, with plans to deepen its market penetration in Taiwan, South Korea and China, Oh said the group will be spending RM45 million the next three years to build engineering centres in the three countries.

“This amount includes set-up costs, purchase of equipment and recruitment of manpower,” he added.

Oh sees the three countries, along with Singapore, remaining as its key markets. Presently, about 90% of Mi Technovation’s revenue is derived from overseas markets, with Taiwan, China and South Korea accounting for 75% of the total revenue.