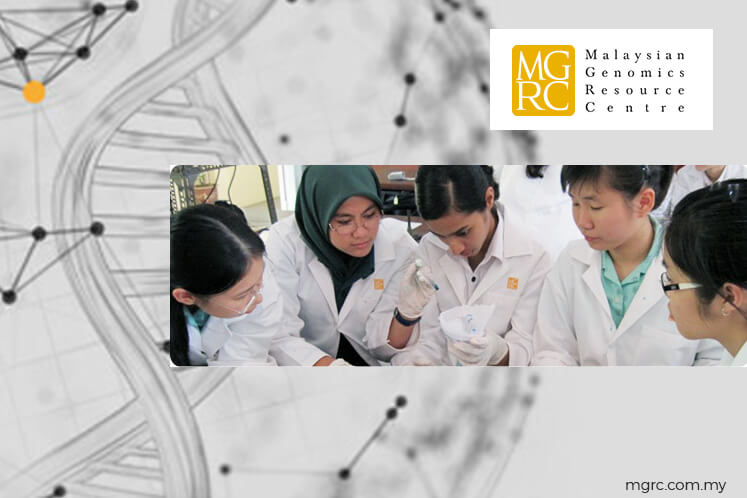 KUALA LUMPUR: Malaysian Genomics Resource Centre Bhd (MGRC) has long seen its share price pressured by the absence of growth catalysts since its listing on the ACE Market in October 2010.

The illiquid stock has never traded above its initial public offering (IPO) price of RM1.08, and its current price is just one-third of that.

Investors shy away from the group due to its staggered earnings, which used to come from projects relating to its lesser-known genome-related services business.

Chief operating officer Sasha Nordin, however, said MGRC is making efforts to bring investors back and lift the group to the Main Market after underperforming for seven long years.

“The group has more assets today than it did at the time of IPO so we believe we are currently undervalued,” Sasha told The Edge Financial Daily in an email interview. “We have always been acutely aware of the low volumes and lack of liquidity, and addressing this is pegged to almost every commercial decision we make.”

Last year, MGRC acquired full ownership of MPath Sdn Bhd, the holding company of pathology services franchise Clinipath. It is now the only public-listed firm with a network of pathology laboratories. It has 19 labs presently with two more in the pipeline.

“Fundamentally, we are in a stronger position now and have more prospects than we did at the time we were listed,” said Sasha.

More importantly, MGRC also seeks to integrate its genetic testing expertise in the growing pathology (diagnosis of disease) market, claiming the synergy will put them at the forefront of modernising clinical pathology in Malaysia.

MGRC’s core expertise revolves around genomics sequencing and analysis (GSA). In a nutshell, a genome can be visualised as a book, with writings in the paragraphs made up of individual genes. Genome sequencing gets you the raw data for analysis.

The information can be used for many purposes, such as to help curb disease infestation among agricultural crops. Projects under this division provide high margins, but payments are usually tied to project milestones and can make revenues inconsistent or lumpy.

Sasha explained that Clinipath’s full inclusion in its book, which was done in the last few weeks of FY17, is indicative of a stronger group performance in FY18. “In the final three weeks of FY17 between June 9 and June 30, 2017, Clinipath contributed a total revenue of RM1.3 million. For FY18, we expect revenue to increase,” he said.

Unfortunately, for the first quarter ended Sept 30, 2017 (1QFY18), MGRC again slipped into the red with RM823,000 in losses, against a net profit of RM829,000 in 1QFY17 due to lower project-based income. This was despite revenue nearly doubling to RM6.38 million from RM3.29 million, mainly driven by revenue from Clinipath.

On the other hand, MGRC also has its own footprint in healthcare through its genetic screening service (GSS) which is promoted under the Dtect brand. It screens for strains of genes that are likely to develop diseases such as chronic diseases, fertility problems, or cancers, among others.

This is where MGRC’s expertise can add value to Clinipath’s offering — Dtect allows for preventive healthcare, instead of curing diseases when they occur. “Currently, we are the only pathology group in Malaysia which is able to develop genetic-based tests,” said Sasha.

“Already, MGRC, together with Clinipath, is working on new genetic tests for the rapid identification of pathogens,” he added. “This is an exciting opportunity for individuals who would like to invest in this important segment of healthcare services.”

Sasha pointed to over 6,500 clinics and 200 hospitals in Malaysia that could provide MGRC with the much-needed growth in recurring income.

“The private pathology market in Malaysia is believed to generate annual revenue of between RM700 million and RM1 billion, with a compound annual growth rate (CAGR) of the market of 9%,” he added.

Apart from Dtect, MGRC also provides additional testing variants through its tie-up with Fulgent Genetics, which has the world’s largest genetic testing menu with 18,000 tests for 7,700 genetic conditions together with advisory support for participants. MGRC has also partnered dialysis services provider DaVita to offer its pathology services for patients with kidney ailments.

With Clinipath plans largely laid out, Sasha however assured that MGRC still has the capacity, and will continue to provide the higher-margin GSA services as and when demands arise.

MGRC was formed in 2004 by Synamatix Sdn Bhd — an indirect unit of Khazanah Nasional Bhd — to support the development of Malaysia’s biotechnology industry. The company is now 63%-owned by Khazanah, with Sabah tycoon Tan Sri Koh Kin Lip emerging as a substantial shareholder with a 5.02% stake as at June 30, 2017.

In the equity market, Koh is known for helping Cocoaland Holdings Bhd more than triple its market capitalisation since his appointment as a director in 2010, from RM157 million in 2009 to RM617 million presently. He still holds equity stake and directorship in numerous listed companies, and emerged as a substantial shareholder in Mexter Technology Bhd and SCH Group Bhd as recently as last year.

MGRC’s share price closed at 35 sen last Friday, giving it a market capitalisation of RM36.23 million — far from the RM100 million-range during its Bursa Malaysia debut.

Whether MGRC’s plans and the presence of these reputable shareholders will result in its long-overdue growth remains to be seen. But if recurring income can pique the interest of healthcare tech-centric investors, they might want to keep an eye on MGRC’s progress in the long run.