Merkel says 'Let's get through this' as shops, bars and churches shut 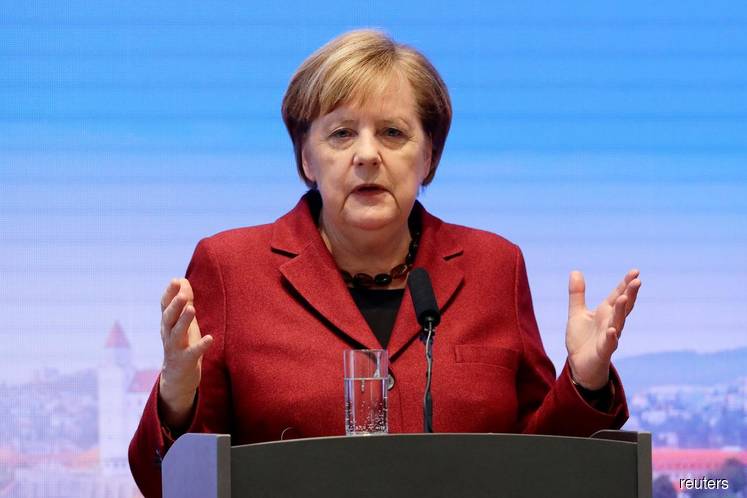 BERLIN (March 16): German shops will close, restaurants cut their opening hours and churches and mosques will stand empty under drastic steps announced on Monday to slow the spread of the coronavirus.

The measures took Germany a step closer to a total lockdown similar to those implemented in Italy and Spain, where most people have been confined to their homes.

Announcing the moves - particularly sensitive in a country that defends its civil liberties assiduously due to its memories of totalitarian rule under the Nazis and, in East Germany, the Communists — Chancellor Angela Merkel asked for cooperation.

The Robert Koch Institute for disease control reported a daily jump in coronavirus cases in Germany by over 1,100 to 6,012, and a total of 13 deaths.

But the virus is also taking its toll on the economy, Europe's biggest, ending hopes of a first-quarter upswing.

Under guidelines agreed by the federal and state governments, bars, clubs, theatres, zoos and even brothels must close. Gatherings in churches, mosques and synagogues and in sports and social clubs must also cease.

Grocery stores, pharmacies, banks and delivery services can remain open, but restaurants may open only between 6 a.m. and 6 p.m. Schools have already been closed.

Merkel said it is crucial to slow the spread of the virus, so that the number of simultaneous acute cases never exceed the capacity of the healthcare system.

"There is no sense in closing a school and then have the same gathering of children move to the playground instead," she said. "We want to avoid having these areas of close contact."

Asked if the crisis would result in rescue programmes for banks, companies and other European Union member states, Merkel said Berlin was willing to help, but that it was too early to talk about concrete steps.

Finance Minister Olaf Scholz promised to counter the social and economic impact of the epidemic "with full force", without putting a figure on the promised fiscal push.

Berlin plans numerous measures to strengthen the healthcare system, shield companies and secure jobs, and this will affect federal budget plans for 2021-24, according to Scholz's letter to ministers and lawmakers, seen by Reuters.

The federal government has budget reserves of more than 48 billion euros (US$54 billion) and could raise up to 35 billion euros of new debt if Berlin decided to ditch its balanced budget goal in the course of the year.

In addition, the Federal Labour Office has reserves of 26 billion euros that can be used to finance state aid for firms under short-time work schemes. The public health system has accumulated reserves of nearly 20 billion euros.

Air travel all but frozen

Even in a best-case scenario, where the severed supply chains that link Germany's export-dependent economy to the world are quickly repaired, stabilisation is unlikely to come before the third quarter.

But with disruption being felt across the economy, it is not certain to happen then, even with the help of aid programmes.

Germany temporarily reintroduced border controls at the weekend with Austria, Switzerland, France, Luxembourg and Denmark, and the federal government has advised citizens against non-essential trips abroad.

Baden-Wuerttemberg, the southwestern state that is home to carmaker Daimler, is closing Stuttgart and Karlsruhe airports.

The federal government for its part has loosened insolvency rules that risked forcing companies into declaring bankruptcy while they waited for state aid.

Bavaria, the wealthy southern state where some of Germany's biggest companies are based, including carmaker BMW and engineering giant Siemens, has launched a 10-billion-euro (US$11 billion) fund to let the regional government buy stakes in struggling companies.