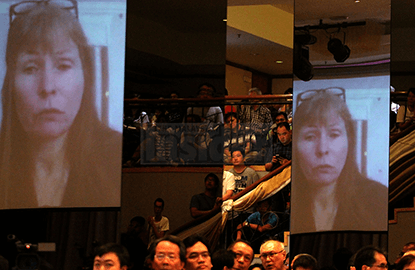 (July 20): Sarawak Report founder Clare Rewcastle-Brown today made public emails between her and journalist Lester Melanyi to prove that he was not involved in the whistleblower site's expose on 1 Malaysia Development Berhad (1MDB).

In an email interview with The Malaysian Insider, she said the emails sent by Melanyi to her, from March 1 till recently, revealed that he knew nothing about the 1MDB expose or what she was doing, given that he had asked very "basic questions".

She added this gave her the impression that he was merely "fishing" for information.

Rewcastle-Brown added she only gave Melanyi polite but distant one-liner replies in her emails, adding that she had not seen him for many years.

"The whole story that I had somehow asked him to be involved in producing the articles and about forging documents is rubbish.

"It is clear he is completely out of the loop on the whole thing and was asking basic questions, neither is there the slightest reference at all to any exercise of such a nature," she said.

Rewcastle-Brown said Melanyi had also tried to get her to say certain things, but she dismissed him.

In one of Melanyi's emails he asked Brown if she was going to "topple Najib", referring to Malaysian Prime Minister Datuk Seri Najib Razak.

"I said absolutely not, as it is not my role, I am just exposing the truth as a journalist," she said of the contents of one of the email correspondences between her and Melanyi.

Melanyi had last week produced a video confession claiming that the opposition and Sarawak Report colluded to falsify documents on 1MDB in a campaign against Najib.

Since news broke of his video confession, many have cast doubts over his credibility, including Sarawak senior minister Tan Sri James Masing.

In the police report, Melanyi was named as a former editor of the whistleblower site, but this was dismissed by Rewcastle-Brown, who said he had never worked with the London-based site.

Rahman had also said he had seen an e-mail by Rewcastle-Brown in which she purportedly admitted to forging the documents after staying up "night after night".

But this, Rewcastle-Brown had clarified, came about after Melanyi contacted her regarding the forgery and tampering allegations, which first surfaced after the arrest of former PetroSaudi director Xavier Andre Justo in Thailand.

Rewcastle-Brown said she was replying sarcastically to Melanyi when she spoke about "forging" the documents, which Melanyi had published and later cited in the police report.

Today, she said the emails between her and Melanyi would show that she was being sarcastic again when she referred to "managing my large team of writers".

"I was responding sarcastically to what was being suggested during the Umno attacks at the time.

"Lester does know perfectly well that I am a one-person writing team at SR... which includes the fact that he is not part of it either and has never ever written anything for my report."

She had said Melanyi had never written a "single word" for the site, although she had met him when he worked with her for Radio Free Sarawak which was used to expose alleged corruption by former Sarawak chief minister Tun Abdul Taib Mahmud and his family five years ago.

Rewcastle-Brown expressed hope that rather than writing about her, focus should be given on the "solid evidence" on 1MDB and the money that allegedly went into Najib and his wife, Datin Seri Rosmah Mansor's accounts.

"That is the story, not all this nonsense about me and the Malaysian press are falling for some pretty blatant diversionary tactics to make me the headlines instead of that misappropriated money."

1MDB, a state investment arm established in 2009, sits on a RM42 billion debt and is also tied to allegations that some of its funds were transferred into Najib's personal accounts in March 2013.

Najib has denied the allegations and threatened legal action against The Wall Street Journal, which had published the expose.