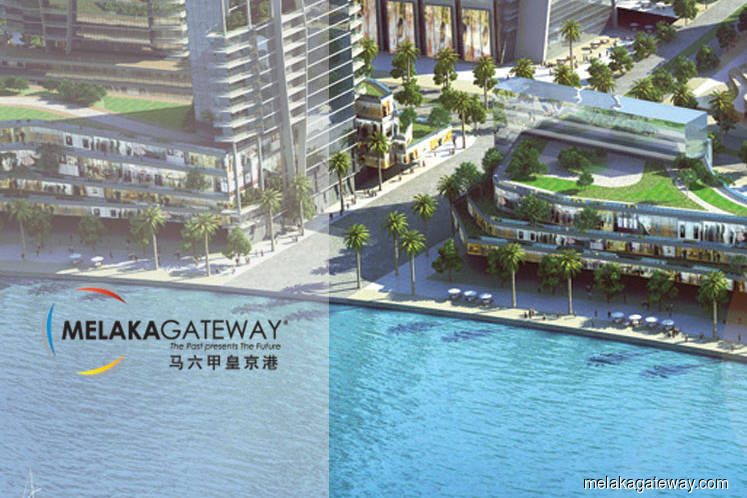 KUALA LUMPUR (May 29): KAJ Development Sdn Bhd will resume two projects under the RM43 billion Melaka Gateway plan after the Transport Ministry allowed the company to appeal against the government's earlier decision to scrap the development.

"The ministry had issued a letter on May 20, in which the minister Anthony Loke had decided to allow our client's appeal vide letter dated Nov 14 last year.

"Hence, KAJ Development's project to have a cruise jetty licence together with the deep sea port licence is valid and existing for it to carry out their development on the project [the Melaka Gateway] as planned," said the lawyer.

Hence, Haniff said his client has decided to withdraw its judicial review application following this development.

"Therefore, there is no need to carry on with the judicial review application since the minister has answered in the affirmative to restore both the joint licences. In the circumstance, the application is withdrawn.

"The judge recorded the withdrawal of the application," added the lawyer.

Last week, it was reported that Haniff sought one week's time for him and his client to verify the ministry's letter to allow their appeal.

KAJ Development had previously filed the judicial review and named Loke, the Melaka Port Authority and the government as respondents.

theedgemarkets.com previously reported that the ministry and Loke were given a month from April 24 to reply to KAJ Development's appeal, after it had revoked approvals for the project granted by the previous Barisan Nasional (BN) government.

To recap, the Melaka Gateway is an integrated deep-sea port project which was greenlit by BN shortly before the 14th general election in May last year.

It was reported last March that KAJ Development received a letter dated Oct 5 last year, informing the firm that the "port operating licence for integrated deep-sea Melaka Gateway and cruise terminal jetty" had been cancelled.

It appealed the decision via a letter to Loke on Nov 14, but did not receive any reply.

Hence, it sought a review of Loke's decision as the previous government had initially approved the licence for the project in March 2018.

KAJ Development claims it had submitted its application since January 2014 to operate Melaka Gateway, which it says would bring tourists and develop the maritime industry and hence bring economic contributions to the country.

The project, it claimed, had also attracted the interests of three China-based companies and Royal Caribbean Cruises Ltd.

For this reason, KAJ Development sought leave for the full merits of the application to be heard.

It also sought a declaration that Loke's decision to reject the appeal in cancelling the licence by not replying to the appeal letter by Dec 15 was not in accordance with the law or against his statutory duty, and hence the decision (to cancel the licence) was null and void and was not enforceable.

KAJ Development also sought a certiorari order to quash the cancellation of the operating licence.

Alternatively, it wanted to obtain a mandamus order to compel Loke to give a response to the appeal within 14 days of the court order.