Medtech: No more pins and needles in blood glucose testing 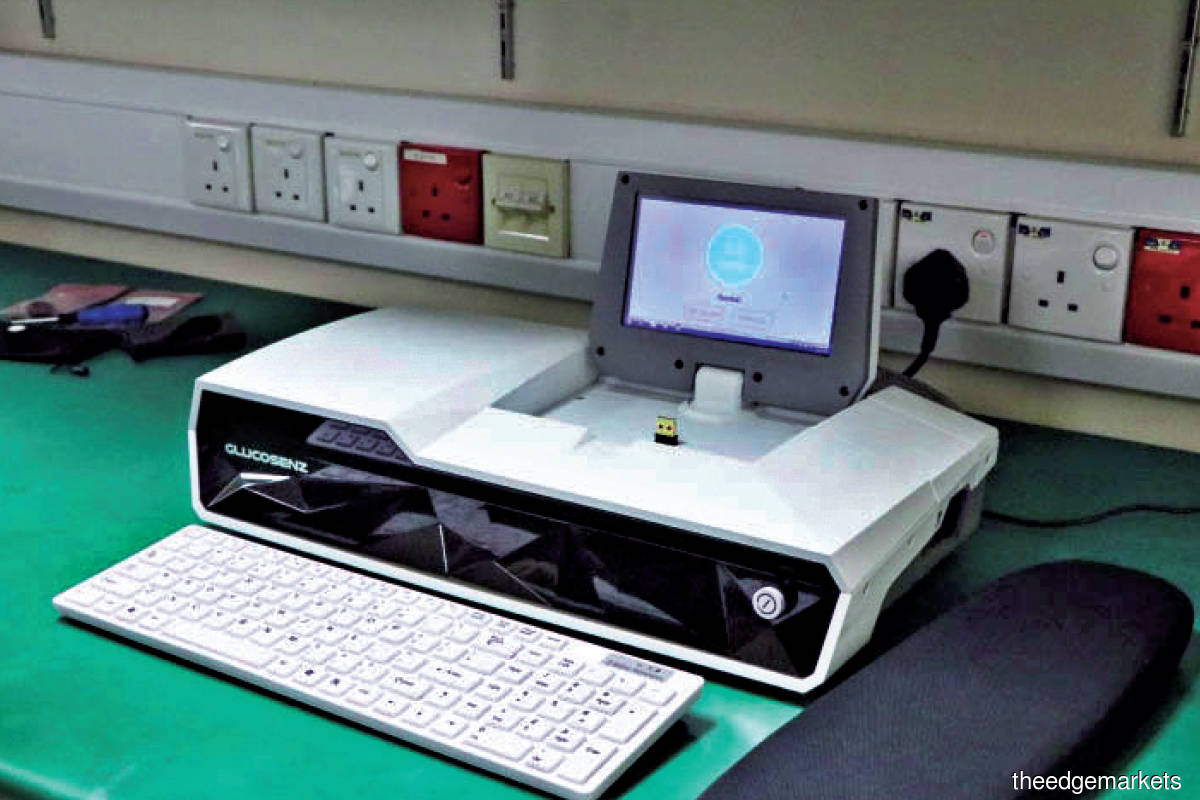 Most healthy things come in unpleasant forms. But unlike broccoli or exercise, injections strike terror in the hearts of many. This may explain Malaysians’ reluctance to get tested for non-communicable diseases such as diabetes.

The fear of needles, or trypanophobia, affects an estimated one in 10 people globally, with symptoms such as sweating, fainting, vomiting and nausea. Yet, blood sugar levels are conventionally measured through glucometers, which use lancets to puncture the skin and draw blood.

Less painful options include micro­needles on wearable devices and watches, which still draw tiny amounts of blood from the skin. Almost every existing option causes some form of discomfort and is, in addition, not environmentally friendly, using disposable parts such as plastic and needles.

There is great demand for blood testing that is affordable, sustainable and comfortable. One in five Malaysian adults suffers from diabetes, yet almost half of them have never been examined or diagnosed with the condition, according to the 2019 National Health and Morbidity Survey (NHMS).

OSA Technology Sdn Bhd aims to resolve this problem by introducing the world’s first true non-invasive glucometer — Glucosenz. It is a wholly Malaysian product, the result of a collaboration with Mimos Bhd for the past six years. It measures blood not through needles, but with light.

This methodology serves as the basis of all glucometers, and the technology has changed little since the 1960s. It does have weaknesses, such as the need to recalibrate the device every six months to ensure accurate readings. Microneedles require a more frequent recalibration, every two weeks, as the human body generates proteins as a protective measure against skin puncturing.

Instead of enzymes, Hyzan explains that Glucosenz detects the glucose content through near-infrared spectroscopy (NIRS). In extremely simplified terms, NIRS bombards atoms with infrared light and excites them. Once these atoms are de-excited, they emit different types and amounts of light depending on what material they are made of.

The light then passes through various filters designed only to isolate the glucose content. This spectrum of infrared light can penetrate human skin, eliminating the need to draw blood. Users only need to place their thumb on the reader for 30 seconds, and the result is calculated and displayed on the screen of the device. “Currently, spectrometers [used in NIRS] are expensive, so we plan on having Glucosenz primarily placed in clinics and hospitals as a monitoring device. It is not meant to diagnose [diabetes]. For that, you have to visit a doctor,” Hyzan stresses.

“However, we did an experiment where we placed the device in corporate offices or public spaces. People would line up and get their sugar levels tested because it only took 30 seconds to do so. If their reading was abnormal, this would prompt them to visit doctors for a proper diagnosis.”

Because it does not rely on enzymes, Glucosenz does not use any consumable parts. This significantly reduces wastage, considering the number of tests diabetic patients have to undergo throughout their lives. The device is also simple to use, eliminating the need for trained health personnel under clinical conditions.

More importantly, the Glucosenz device alone is only half the product. Hyzan explains that the big data generated from these exercises can extend the possibilities of how the product can be used.

For example, a device in Puchong can collect anonymous data — only the glucose levels, age and gender of every patient. This data can be used to predict the growth trajectory of diabetic patients in that district alone, prompting local authorities to come up with localised sugar reduction campaigns.

On an individual level, big data can also be used to perform predictive analysis. The device is able to track a person’s glucose level across time and identify the early signs of diabetes, prompting the patient to rectify them before they escalate into a larger problem.

Glucosenz’s benchtop model has passed clinical trials and is currently being prepared for commercialisation and mass manufacturing. The device is slightly larger than a Playstation console and costs roughly RM200,000 per unit.

Due to its size and cost, the benchtop model targets hospitals and healthcare research institutions with a lease-to-own option. The company is planning to design a portable and wearable version of the device that is cheaper and more accessible to end consumers, once the technology has matured and been tested further.

Glucosenz is not OSA Technology’s first foray into the medical device market.

When Hyzan was still an associate professor at Hospital Universiti Kebangsaan Malaysia (HUKM) almost two decades ago, doctors regularly used orthopaedic implants from Europe. These implants were not suitable for the Malaysian population, and he had long wanted to design and manufacture better implants. It remained merely an idea for the longest time.

When the Indian Ocean tsunami hit Malaysia’s west coast in 2004, Hyzan served as a medical volunteer for the humanitarian efforts. During the first week, he had to perform surgery in field hospitals without anaesthesia because the hospital buildings were damaged.

His team requested international implants and instruments, but they did not arrive on time due to the chaos at the scene. When supplies were low, Hyzan still needed to conduct surgery nonetheless. He improvised by cleaning and sterilising any suitable metal and wires they could find, and affixing them to broken bones.

After the ordeal, he learnt that there were no local producers for orthopaedic devices and implants in Southeast Asia. There are some factories in Penang that manufacture and sell them to brands overseas, which resell them back to Malaysia at a higher cost. Seeing the gap in the market, he established OSA Technology that year — the first Malaysian company to produce its own orthopaedic implants.

In four years, the company managed to obtain the necessary ISO certifications. It was awarded the contract as the main supplier for orthopaedic implants in all Malaysian public hospitals. After a decade of producing implants, it decided to try its hand at glucose measurements through collaborations with Mimos Bhd in 2015. As it turns out, both are inadvertently linked.

“I am currently an orthopaedic surgeon at Sunway Medical Centre, and I operate on one or two patients a day,” says Hyzan. “We have encountered a lot of patients with diabetes complications. We had to amputate their limbs, which severely affects the patient’s family members and their children. But with Glucosenz, it can help solve many of these problems.”

Despite the complexities of the device, designing Glucosenz was perhaps the easiest part of the product journey. Tapping his past experience executing government contracts, the real challenge lies in garnering support from the medical community, says Hyzan.

“Even if we have the product tested and certified, it is difficult to penetrate the market. Medical professionals have been using international brands for many years, [and they] have never given any problems. To them, using Malaysian-made products is a risk,” he adds.

“Western products have a perceived higher product quality with an equally hefty price tag. Products from China or India are cheaper but some of their standards can be questionable. Our product is comparable with Western ones, but the Malaysian public wants it cheaper than China or India. It is a struggle to educate the public.”

In short, the real battle Hyzan currently faces is garnering trust in Malaysian products. When asked if he would be interested in selling the technology overseas instead, he says that he received offers from the Singapore, Dutch and Indian governments, as well as private South Korean companies.

However, he has no plans on selling or licensing the technology as yet. He believes that it is wiser to manufacture and create a market for such a product to have a more advantageous position at the negotiating table.

“If Glucosenz is produced in Malaysia, supported by the Malaysian public and works perfectly, we hope to secure investments from large Malaysian corporations. It is better to have these major corporations represent us during the negotiation because we would like to focus on what we do best, which is to innovate,” says Hyzan.

“The second reason is that we love our nation, despite all its ugliness. We want to elevate Malaysia’s position to show the world that we are technologically advanced. If we do this, many more will come. Our children who are studying science subjects can have a direction to strive towards.

“Many of the innovations we speak of are technology brought from overseas and localised for the domestic market. But our work is wholly Malaysian — the sweat, tears and aspirations of Malaysians. We hope to share this with the public, and that the rakyat can continue to support our work.”