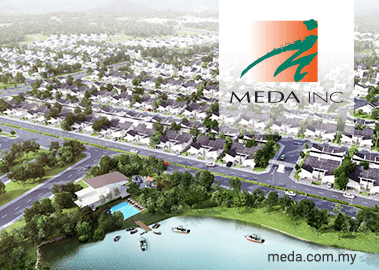 In a filing with Bursa Malaysia today, Meda (fundamental: 0.35; valuation: 0.6) said it has entered into a conditional share sale agreement with BCM Holdings Sdn Bhd to acquire a 100% stake in the latter.

Meda said BCM’s land, which carries a net book value of RM21.2 million as at May 31, 2015, is in a prime area in the southern fringe of the city centre.

Meda said it intends to develop a mixed development on the plot that comprises serviced apartments and commercial properties, with an estimated gross development value (GDV) of RM881.91 million.

“The development is expected to commence in the fourth quarter of 2015 and complete within 48 months from the commencement of the development,” Meda said.

Meda said it will settle the purchase consideration by a combination of RM139.8 million cash; and the issuance of 67 million new shares at an issue price of 60 sen per share, worth RM40.2 million.

The issue price was determined based on five market days volume weighted average market price of Meda’s shares up to Jun 24, 2015.

As for the development cost of the said properties, Meda said it will finance it with bank borrowings and internally-generated funds, but the exact amount will be decided at a later stage, after taking into consideration, the group’s gearing level, interest costs and internal cash requirement.

Meda said the deal represents a timely and unique opportunity for it to acquire land bank in the Klang Valley and strengthen its presence as a developer here.

“The board is of the view that the proposed acquisition, as well as the premium of the purchase consideration, is justifiable and to the benefit to the stakeholders of the Meda Group, as it represents an opportunity to acquire new land bank in a strategic location, with strong growth potential to enhance the GDV of the group’s development projects and provide greater sustainability to future earnings,” the filing read.

The deal, which is expected to be completed by the fourth quarter of 2015, requires the approval of Meda’s shareholders.