MBSB aspires to be an Islamic bank

Malaysia Building Society Bhd
(April 16, RM2.26)
Maintain market perform with a target price of RM2.40: According to media reports, MBSB is aiming to become an Islamic bank in the next five years. It was reported that the plan was put on hold in view of the mega merger of CIMB Group Holdings Bhd, RHB Capital Bhd and MBSB (discussions began in July 2014) which was called off in January this year.

This serve as confirmation of the group’s aspiration to become an Islamic bank. There were already hints of this in the past few months.

Currently an exempt finance company, the transformation will allow the group to tap into cheaper sources of funding presently not available to it (current accounts, for example) and to increase its product offerings (for example, Treasury products) which could become a future source of non-interest income (FY14: 7% of total income).

The takeaway from our previous meeting with management was that the group is still open to corporate exercises that will help it to achieve or accelerate its aspirations and transformation plans. Hence, it is possible that we may see the group in another merger and acquisition (M&A) scenario in the next five years.

At present, there are 16 licensed Islamic banks in Malaysia, which could be future competitors if MBSB were to become an Islamic bank. On the flip side, they could also be potential partners (including foreign players whose shareholdings are restricted to 49% ownership) to help MBSB achieve its aspiration. Rumour has it that Bank Islam (which is aiming to grow its local footprint) could be a potential partner. However, MBSB has denied that it has begun discussions with any party.

The aspiration runs alongside its 2015 to 2020 “second marathon” goals of, among others, elevating its fee income contribution (FY14: 4% of total income) and expanding its corporate loans (in selected industries such as plantation, property and industrial equipment) to make up 30% of its portfolio (FY14: 11% of gross loans).

We believe the group will likely be an acquisition target in an M&A scenario given the group’s smaller market capitalisation of RM6 billion (larger only compared with Affin).

Maintain “market perform”. Those invested in the counter may consider staying invested as things could get interesting. Meanwhile, potential investors should keep an eye on further developments. Its share price could rerate up to the offer price if the deal is made attractive enough to succeed.

We maintain our target price of RM2.40 based on a FY15 blended price-to-book/price-earnings ratio of 1.4/7 times.

Risks to our call include: (i) potential tighter regulations by the central bank; (ii) higher credit cost arising from weaker asset quality; and (iii) higher credit risk as the group has started to grow its loan book via industrial hire purchase and property-related projects. — Kenanga Research, April 16 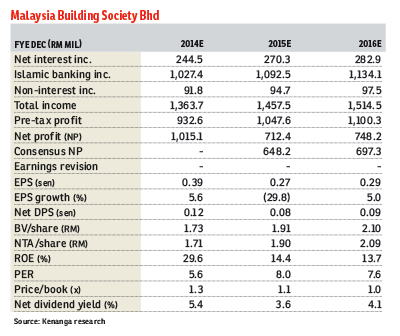