MBM could be beneficiary of ‘cash for clunkers’ programme

MBM Resources Bhd
(Jan 21, RM3.03)
Upgrade to buy with a higher target price (TP) of RM3.40 from RM3.30: We raise MBM to “buy” from “hold” and raise our fair value to RM3.40 per share (from RM3.30 per share previously) on the back of an improving earnings outlook and battered valuations.

We raise our earnings for financial year 2015 (FY15) by 9% and for FY16 by 14% to factor in higher total industry volume (TIV) expectations for Perusahaan Otomobil Kedua Bhd (Perodua). Our revised projections are 5% and 10% higher than consensus over FY15 and FY16.

MBM’s share price has fallen 13% over the past 12 months on the back of: (i) stalling Perodua TIV; (ii) weak earnings from discounting; (iii) absence of an A-segment model from July to end-August 2014; (iv) start-up cost of Perodua’s new plant and (v) doubling in losses from Oriental Metal Industries (M) Sdn Bhd’s alloy wheel unit.

Valuations, which have retreated to below mean (7.9 times FY15 price-earnings ratio), sufficiently reflect the earnings per share deceleration in FY14.

Earnings prospects are improving dramatically given the strong momentum from the Axia model (Perodua accounts for 80% of MBM’s bottom line). The Axia has garnered more than 70,000 bookings since its launch (average 15,000 bookings per month or 95% of Perodua’s 2014 monthly TIV) with 29,000 units delivered up to December 2014.

At the current production rate, the waiting list is estimated at four to five months and should sustain Perodua’s TIV throughout the challenging first half of 2015. We estimate Axia will account for more than 40% of Perodua TIV in 2015.

A strategic shift in Perodua’s A-segment price points seems to have tackled the high loan rejection rate issue it faced previously. More than half of Axia’s higher variants (that did not exist in the Viva generation) are priced closer to the B-segment, that is the largest segment in the industry which targets more affluent buyers with few credit issues.

The majority of Axia buyers are “additional car” buyers, instead of the typical entry level buyers previously.

The potential implementation of the “cash for clunkers” programme (car scrappage programme whereby incentives are given to people for purchasing new cars in exchange for old ones) could be a strong catalyst for Perodua, depending on the rebate offered.

At the mooted RM5,000 rebate, models in the national car price segment will likely benefit the most.

Proton’s “X-Change” programme artificially boosted its TIV by 18% during the trial implementation in 2009.

The record volume comes amid a freeze in sales network expansion to raise efficiency — average volume per outlet is estimated to rise by 6% in FY15.

MBM benefits directly via Perodua and indirectly being the largest Perodua dealer via DMM Sales Sdn Bhd (DMMS). MBM is a net beneficiary of a weak yen via Perodua and Hino, but the impact is muted as Perodua is highly localised. Every 1% change in the yen impacts group earnings by 0.6%. 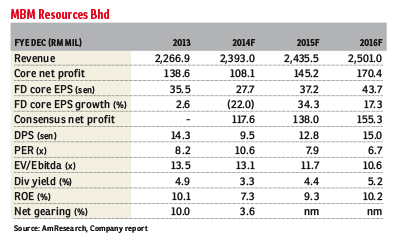