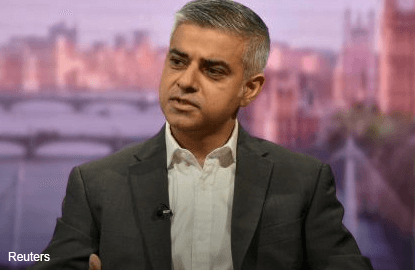 (Jan 19): London Mayor Sadiq Khan warned European Union leaders that their countries will suffer if the UK capital is not allowed privileged access to the bloc’s single market after Brexit.

Financial-services companies, their taxes and jobs will go to competitor countries around the world rather than to European nations if London is frozen-out in negotiations, Khan said in an interview with Bloomberg Television’s Francine Lacqua at the World Economic Forum in Davos Thursday.

“If London was to become inward looking and we fail to secure privileged access to the single market, if we fail to attract talent, businesses would inevitably leave London,” Khan said. “My message to European leaders is they wouldn’t just leave London and go to Madrid, Paris, Frankfurt or Berlin, they’ll go to Hong Kong, Singapore or elsewhere so it’s a lose-lose, a lose for London and the UK and a lose for Europe too.”

Prime Minister Theresa May, who is also in Davos, is due to meet Wall Street executives to hear concerns that Brexit will cost banks passporting rights, which enable them to sell their services to the rest of the EU from bases in London. The EU and member governments have been adamant that leaving the single market removes those rights, putting at risk tens of thousands of jobs in the UK financial-services industry.

Khan called on business leaders to press May on the dangers of a “hard Brexit” and said the premier’s presence is positive for London as she will be told of their anxieties directly, rather than through ministers and other intermediaries.