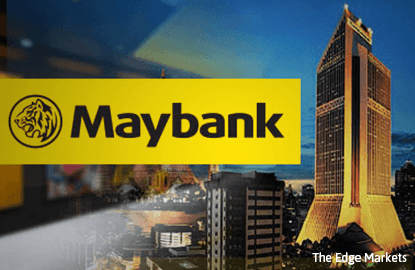 In a filing with Bursa Malaysia today, Maybank said allowance for impairment losses on loans increased by RM501.3 million year-on-year (y-o-y) while net insurance benefits and claims incurred by its insurance and takaful business increased RM330.8 million in 4QFY15 from a year ago.

However, revenue for 4QFY15 came in 14.4% higher at RM11.1 billion versus RM9.7 billion a year ago, largely due to a 19.7% growth in net interest income and Islamic banking income. Maybank said the higher net interest income was driven by strong y-o-y loan growth in mortgage (13.7%), small medium enterprise and business banking (12.3%) and credit cards (9.6%).

Maybank proposed a lower final single-tier dividend of 30 sen per share for the financial year ended Dec 31 (FY15) versus 33 sen per share in FY14, which is subject to shareholders' approval.

For full year, Maybank posted a modest 1.8% increase in net profit to RM6.8 billion from RM6.7 billion a year earlier despite a 13.6% growth in revenue to RM40.6 billion compared to RM35.7 billion in FY14. Besides higher allowances for impairment on loans, a RM1.2 billion or 12.9% increase in overhead expenses also contributed to the lower earnings for FY15.