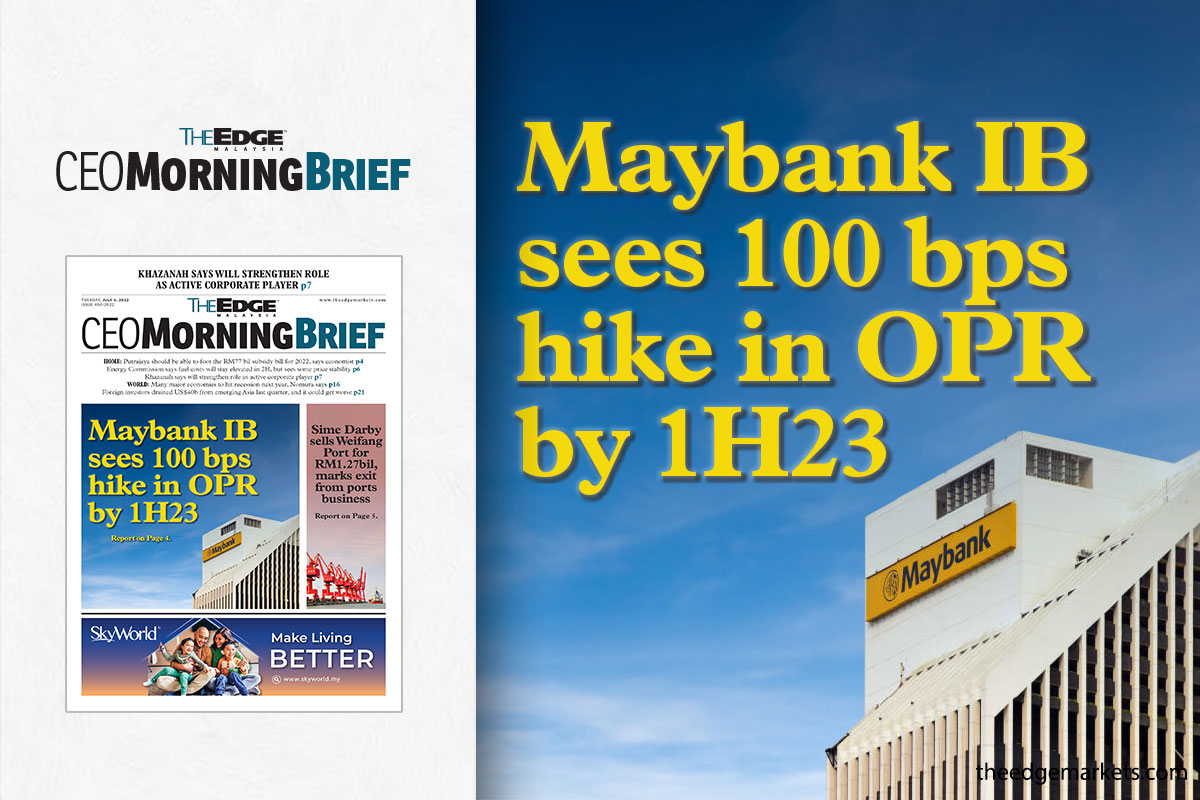 This would be followed by a 25 bps increase by the end of the year and by another 50 bps in 1H23, he said at a virtual briefing on the market outlook for 2H22.

Suhaimi noted that the 25 bps increase in May came about a week after the US Federal Reserve (Fed) raised interest rate by 50 bps at the Federal Open Market Committee meeting.

"With the Fed raising the Fed funds rate by [another] 75 bps recently, I guess we can say with certainty or confidence that the BNM MPC's July meeting will end with another 25 bps [hike]," he said.

Suhaimi added: "In keeping with BNM's statement that they are going to adjust OPR in a measured and gradual manner, we are not pricing in a situation where BNM is chasing inflation and Fed funds rate hikes because I do not think they want to normalise monetary policy to the extent that it would be harmful to the economy by short-circuiting this recovery to the detriment of growth."

The economist expected Malaysia's gross domestic product (GDP) growth to accelerate in 2Q22 and 3Q22, following 1Q22's pickup, thanks to a low base effect.

He, however, cautioned that the ending of the "sugar rush" — entailing the Employees Provident Fund's cash withdrawal schemes, BNM’s accommodative monetary policy, sales and services tax exemption on passenger cars — would drag the economy during the later part of this year in the form of a "withdrawal syndrome".

Suhami projected the economy to slow down next year at 4% from its initial projection of 4.7%, taking into consideration the expected increase in OPR and the removal of the price ceiling for bottled cooking oil which could further increase the people's living cost burden.

On the ringgit, Suhaimi saw a slight improvement in its value against the US dollar to RM4.3 by the end of this year, from RM4.4 currently.

"We are looking at a slight marginal improvement to 4.30, largely due to the fact that BNM would have increased interest rate by 75 bps by end of this year.

"Also, I think by then the market would have started to price in the likelihood of the Fed mirroring its current interest rate hike cycle in early next year," he said.

Of late, the Chinese currency has been stable, and even appreciating slightly, against the greenback, and this would provide some support for the ringgit-dollar rate as well, he added.