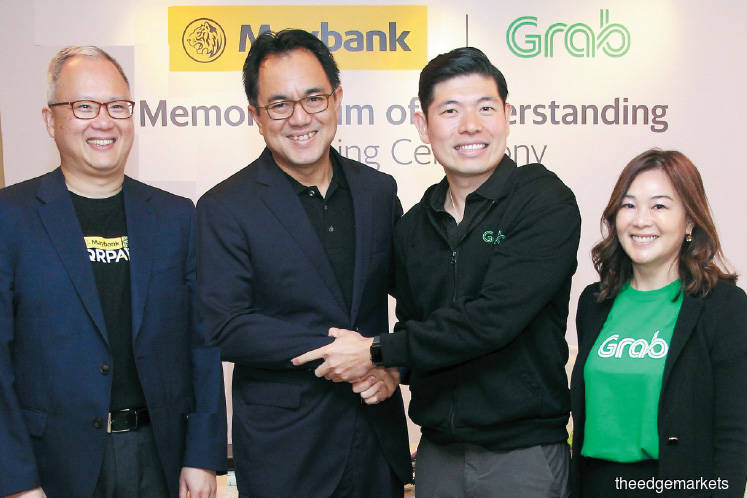 In a joint statement yesterday, the parties said a strategic partnership has been formed in order to facilitate the acceptance and usage of Grab’s new cashless payment method, the GrabPay mobile wallet.

The announcement comes as Grab, which received its e-money licence from Bank Negara Malaysia in December 2017, is set to launch its GrabPay mobile wallet in beta in the coming weeks.

Maybank customers will also eventually have the option of paying via Maybank QRPay at GrabPay merchants.

Consumers will soon also have the added convenience of directly topping up cash to their mobile wallet via Maybank2u, Maybank’s Internet banking portal.

Maybank group president and chief executive officer Datuk Abdul Farid Alias said the collaboration with Grab is part of Maybank Group’s ongoing efforts to provide customers with even more digital conveniences that would not only enrich their online experience but also enhance their lifestyle.

“We are continuously looking to introduce products and services which offer better value by leveraging on cutting-edge technology and a deep understanding of our customers’ needs. With this partnership, our customers will not only enjoy a seamless experience when transacting through GrabPay but also a host of exclusive benefits that would reward them with substantial savings in the long run,” he said.

GrabPay Singapore, Malaysia and the Philippines managing director Ooi Huey Tyng said: “This partnership underlines the strength of Grab’s collaborative approach. The whole industry needs to come together to make the cashless economy a reality in Malaysia. We are honoured to partner with Maybank which not only shares our vision of a cashless-payment future, but also recognises Grab as ideally poised to help make this a reality.

“With the GrabPay mobile wallet as the leading payment method on our Grab app, it will build an interconnected ecosystem of our services, thus making Grab an everyday app to complement consumers’ everyday lifestyle,” she said.