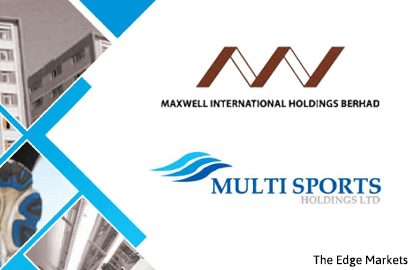 KUALA LUMPUR (May 4): A warning from Bursa Malaysia Securities caused investors to offload the shares of China-based Maxwell International Holdings Bhd and Multisport Holding Ltd pushing the stocks to their all-time this morning.

Meanwhile, Multisport, which produces sports shoe soles, was traded unchanged at 3 sen as at 10.52 p.m. after it gave up its gain of 0.5 sen or 16.67%. The counter saw 4.8 million shares exchanged hands.

The sell down was following Bursa’s warning yesterday that both companies’ securities could risk being suspended, if they failed to submit their annual reports for financial year ended Dec 31, 2015 (FY15) by May 9.

Bursa said if a listed issuer fails to issue the outstanding financial statements within six months from the expiry of the relevant time frames, in addition to any enforcement action that Bursa Securities may take; delisting procedures shall be commenced against such listed issuer.

Recall that on April 26, Maxwell said there would be a delay of up to two months in releasing its audited financial statements for FY15, as its external auditor — Baker Tilly Monteiro Heng — would not be able to complete the group’s audit for FY15 in time for submission to Bursa Securities by April 30.

Multisport, meanwhile, announced on April 25 that there would be a delay of at least two months in the release of its annual report and audited statements for FY15, as auditors had to carry out more work to verify the company’s expenditure and bank balances.