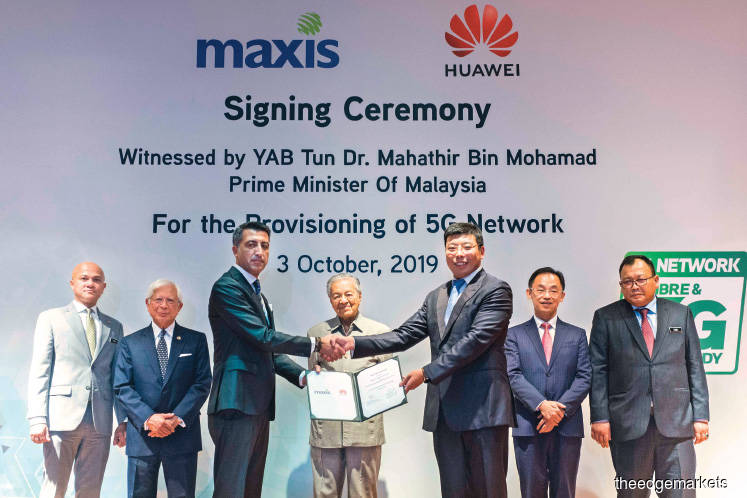 KUALA LUMPUR: Maxis Bhd, which has sealed an agreement with Huawei Technologies Malaysia to get access to the latter’s fifth-generation (5G) network technologies, is ready to roll-out the service next year, as soon as the spectrum is set for release in the second half of that same year.

“Our ambition is to be the first operator and chosen partner [of Huawei] for 5G. As the 5G spectrum release [is expected] in the second half of next year, we are ready for the next step.

“As soon as we launch [the 5G services], mobile plans will be available,” Bernama wrote Maxis chief executive officer (CEO) Gokhan Ogut as saying to reporters after the group signed the agreement with Huawei yesterday in a ceremony that was witnessed by Prime Minister Tun Dr Mahathir Mohamad in Putrajaya yesterday.

While Ogut said Maxis has yet to decide on the pricing as the 5G service network is still on trial, he said the group will opt for a pricing strategy that provides customers with a variety of price options and services.

The agreement was inked by Ogut on behalf of Maxis, while Huawei was represented by its CEO, Michael Yuan.

According to the newswire, Malaysian Communications and Multimedia Commission chairman Al-Ishsal Ishak, who was also present at the event, said the final report on Malaysia’s 5G mobile technology implementation will likely be completed next month.

The interim report by the National 5G Special Task Force would be submitted to Communications and Multimedia Minister Gobind Singh Deo, he said.” Hopefully, by the third quarter [of next year] the [5G] spectrum will [be] allocated,” Al-Ishsal was quoted as saying.

The agreement Maxis inked with Huawei yesterday will allow Maxis to have access to Huawei’s insights, standards, products and solutions that will make 5G easier to adopt, operate and introduce new use cases in Malaysia. Huawei would also be supplying Maxis with 4G/LTE and 5G radio equipment and services under the deal, according to Bernama, quoting Maxis chairman Raja Tan Sri Arshad Raja Tun Uda.

“Leveraging on existing Maxis’ investments and footprint, it (this agreement) will be able to facilitate a faster roll-out of 5G services when the spectrum is available,” Arshad said.

The collaboration follows a memorandum of understanding inked between the two groups in February to cooperate on full-fledged 5G trials, after which Maxis started the first 5G live trials in Malaysia, where it recorded close to 3Gbps download speeds.

In a statement released at the event, Dr Mahathir said collaborations between global players and local vendors are important to support a thriving technology ecosystem in Malaysia. “I am pleased to see Maxis and Huawei taking advantage of this environment and supporting the growth of Malaysia’s digital economy,” he said.