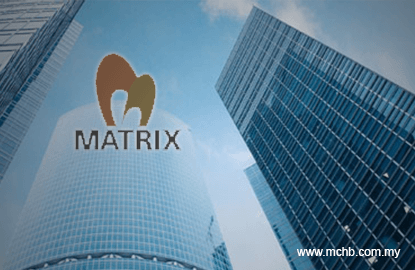 KUALA LUMPUR (Aug 10): Matrix Concepts Holdings Bhd reported a 29.7% drop in net profit for the second quarter ended June 30, 2015 (2QFY15) to RM29.85 million or 6.5 sen per share from RM42.45 million or 14 sen per share a year ago, mainly due to the decrease in revenue recognition from the sales of industrial properties which generally command a higher profit margin.

Despite the lower earnings, the property developer declared a second interim dividend of 3.5 sen per share (2QFY14: 3.75 sen) for the financial year ending Dec 31, 2015, payable on Oct 9.

In a filing with Bursa Malaysia today, Matrix Concepts said it is currently focused on the development of its township development projects in Bandar Sri Sendayan in Seremban, Negeri Sembilan and Bandar Seri Impian in Kluang, Johor.

"We target to launch its Suriaman (Phase 1) and Residensi SIGC development projects, which are located in Seremban in 2HFY15," it added.

It added the operations of the Matrix Global Schools and d'Tempat Country Club is expected to positively contribute to its profitability, among others, the greater marketability of its future projects within the vicinity.