AS THE sole female Avenger, Scarlett Johansson had a bone to pick with Hollywood. Not only were there few female superheroes, they also tended to be dumbed-down.

So when Marvel Studios brought in another formidable woman for summer action film Avengers: Age of Ultron, Johansson, who reprises her role as the feisty Black Widow, was happy to see “a step in the right direction”.

Boosting the female quotient makes sense as women fans could help push Age of Ultron past its predecessor at the box office and possibly make it the top-grossing film of summer 2015.

The film throws a larger spotlight on its female characters, led by Johansson’s Black Widow holding her own in complex fight scenes and finding romance with Hulk (Mark Ruffalo).

The evolution of female characters in Marvel’s superhero movies “has been slow”, Johansson says, since she took the helm as Black Widow in 2010’s Iron Man 2.

“We haven’t really been able to explore the depth of the character behind the superhero — that’s what makes characters interesting,” she says. “It’s nice to see the introduction to Scarlet Witch, and I know that there will be more to come.”

“It’s amazing to have two female characters on a poster for a superhero movie,” Olsen says. “We’re both portrayed as such badasses.”

For box office expert Paul Dergarabedian, ramping up the female perspective is “vitally important” as female filmgoers make up a bigger share of ticket sales.

The Avengers, the third highest grossing movie of all time, opened in 2012 with a record US$207 million in US and Canadian ticket sales. Forty per cent of the opening weekend audience was female, according to a Disney survey at the time.

Disney promoted Age of Ultron to female audiences, sending cast members to TV shows, such as Ellen and The View. It created a line of womenswear inspired by the female stars that includes a replica of Johansson’s Black Widow jacket.

Johansson showed the power of female-led action films with her non-Marvel flick Lucy that grossed more than US$450 million worldwide last year.

But there are no plans for a Black Widow standalone film in Marvel’s upcoming five-year plan. Fans will have to wait until 2018 to see the studio’s first movie led by a female superhero, Captain Marvel.

For Joss Whedon, who wrote and directed both Avengers films, writing female characters wasn’t “necessarily an agenda” for Age of Ultron.

“Everybody, who is in the movie, is usually the best version,” says Whedon. “Dr Cho (Claudia Kim) is the best doctor in the world, and Maria Hill (Cobie Smulders) is the best agent.”

“They’re that smart; they’re that good — [it] doesn’t matter if they’re men or women.” — Reuters 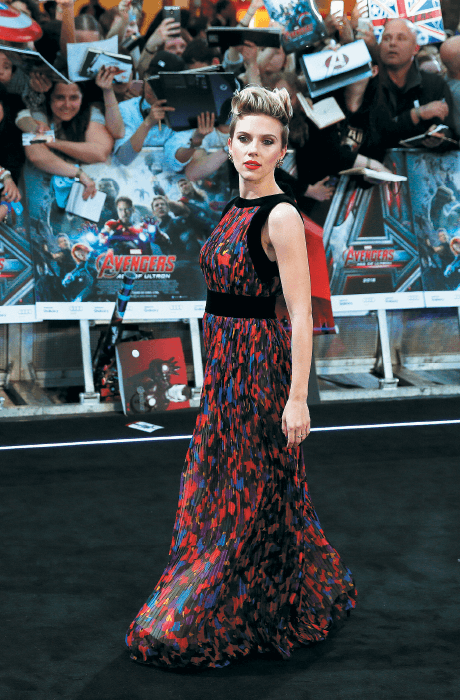