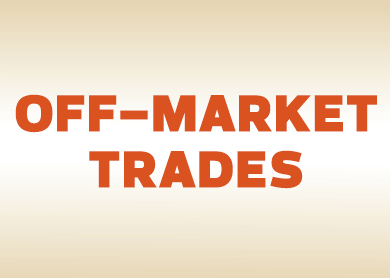 According to filings, Ge-Shen Resources Sdn Bhd sold 11 million shares at 68 sen apiece on the same day, trimming its holding to 29.03% in the high-precision plastic component maker. The buyer could be Chan Choong Kong’s Pelita Niagamas Sdn Bhd, which filings show emerged as a new substantial shareholder after buying the 14.3% block at 68 sen apiece.

On April 20, AE Multi (fundamental: 0.55; valuation: 0.9) director Yang Chao-Tung sold 700,000 shares at 15 sen apiece. On April 27, he and two other directors, Yang Wu-Hsiung and Yang Chueh-Kuang, gave notice of their intention to deal in the company’s shares during a closed period. Collectively, the three had a 5.06% direct and 3.3% indirect stake in the printed circuit board maker.

Pesona Metro Holdings Bhd (fundamental: 1.8; valuation: 0.5) saw 30.82 million of its shares or a 5.89% stake traded off market at between 88 sen and 93 sen apiece in a mix of direct and block trades during the period under review. Of these, 22 million shares changed hands at 88 sen apiece from April 22 to 24.

The buyers and sellers were not known at the time of writing, but it is worth noting that on April 21, substantial shareholder Wie Hock Kiong sold 109.75 million shares for RM39.44 million via a direct deal while increasing his indirect stake by 6.16 million shares to 62.44%, filings show.

On April 27, Pesona Metro agreed to pay RM60 million for a 90% stake in Selasih Asli Sdn Bhd, a special purpose vehicle formed to enter into a concession agreement for the design, development and maintenance of student hostels in Peninsular Malaysia.

Tanjung Offshore (fundamental: 1.85; valuation: 0.9) recently became embroiled in a boardroom tussle and said it is extending its full cooperation to the Malaysian Anti-Corruption Commission (MACC), which reportedly raided the company on Feb 6. In 2012, the company sold its offshore support vessel business to Ekuiti Nasional Bhd (Ekuinas) and ventured into real estate and mining. Ekuinas had since injected the asset into Omni Petromaritime Sdn Bhd to form Icon Offshore Bhd. Icon’s CEO and chief operations officer were recently remanded by MACC and are currently on six months’ leave to assist in investigations.

On April 22, 1 Utopia Bhd (fundamental: 1.25; valuation: 0.9) saw 35.7 million of its shares or a 3.61% stake transacted at one sen apiece, or RM357,000 in total, in a series of direct deals. The company deals in the retailing of consumer telecommunications and IT electronics. 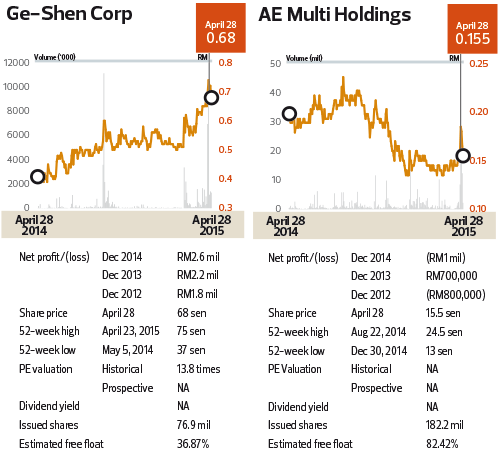