Notable transactions included those at Borneo Oil Bhd, which saw 32.5 million of its shares or an 11.72% stake traded between Oct 1 and 7 in a series of direct and block deals worth RM22.7 million in total. Shares of the company, which is diversifying into mining, were transacted between 53 sen and 72 sen apiece, stock market data shows. Some 26 million shares changed hands at 72 sen apiece or RM18.7 million in total between Oct 3 and 7, at a premium to market prices. Borneo Oil recently placed out 46.2 million shares, or 16.65% of its enlarged share base, at 56 sen apiece.

Borneo Oil’s shares jumped 15% to last Wednesday’s closing price of 69 sen from 60 sen on Sept 22.  An Oct 7 filing with Bursa Malaysia shows that Hap Seng Insurance Services Sdn Bhd, a unit of Gek Poh (Holdings) Sdn Bhd, has emerged as a substantial shareholder after acquiring 51.2 million shares or an 18.47% stake in Borneo Oil on Oct 3 at undisclosed prices. It bought another 11 million shares or a 3.97% stake at 72 sen apiece on Oct 7, raising its holding to 64.06 million shares or 23.09%. Tan Sri Lau Cho Kun @ Lau Yu Chak, nephew of the late Hap Seng group founder Tan Sri Lau Gek Poh, is deemed interested in the stake.

Meanwhile, Biosis Group Bhd saw 20 million of its shares or a 19.05% stake traded off market in five direct deals for RM5 million on Sept 30 and Oct 1. The shares were transacted at 25 sen apiece, at a premium to the market price of 18 sen.

The purchaser was likely Erwan Azizi, 32, son of Ferrari Owners Club president Datuk Azizi Yom Ahmad, who emerged as a substantial shareholder of Biosis with a 19.05% stake or 20 million shares after buying 10.2 million shares on Oct 1, a filing dated Oct 3 shows.

The PN17 company recently submitted a regularisation plan and is awaiting a decision from Bursa.

Last month, The Edge Financial Daily reported that Ni Hsin may see a reverse takeover by an oil and gas outfit. When queried by Bursa, Ni Hsin said it was not aware of such a deal. Its share price rose to a high of 51 sen on Sept 24 from 32 sen on Sept 8. It closed at 38.5 sen last Wednesday.

On Sept 30 and Oct 1, property and construction company Gabungan AQRS Bhd saw 21.3 million of its shares or a 5.46% stake traded off market for RM39.4 million. The shares were transacted at RM1.85 and RM1.88 apiece in four direct deals.

An Oct 2 filing shows that Gabungan AQRS chief financial officer Bernard Lim Soon Chiang is no longer a substantial shareholder after he sold 10.7 million shares off market on Oct 1. 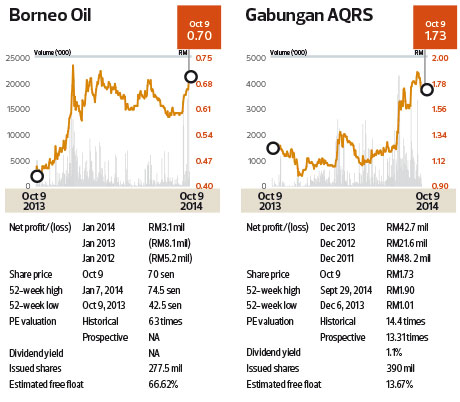