THE market rebounded just as we expected last week after testing the 1,710-point support level. The support came from local institutions and retail as foreign institutions continue to sell on weak Malaysian ringgit, which has fallen to 5½ year lows against the US dollar. Another contribution to the increase in the index was a 14% increase in FBM KLCI component stock heavyweight CIMB Group Holdings Bhd (CIMB) share prices yesterday after the merger among Malaysia Building Society Bhd, RHB Capital Bhd (RHBCap) and CIMB may be called off. The FBM KLCI rose 1.9% in a week to 1,748.90 points yesterday after rebounding from a low of 1,706.18 points last Wednesday.

Trading volume on Bursa Malaysia increased as the market started to pick up some bargains. The average daily trading volume in the past one week was 1.7 billion shares  compared with 1.4 billion shares in the previous week. The average daily trading value in the past one week increased to RM1.9 billion compared with RM1.5 in the previous week.

Gold continued to increase on market uncertainty and climbed to its highest level in two months. Commodity Exchange gold increased 2.3% in a week to US$1,233.40 (RM4,404) an ounce. However, crude oil continued to decline for its fourth consecutive week. WTI crude fell 8.4% in a week to US$45.71 per barrel, the lowest level in nearly six years. Crude palm oil (CPO) increased on a weak ringgit and low output of palm oil for the month of December. CPO rose 3.1% in a week to RM2,354 per tonne yesterday.

The FBM KLCI broke above the short-term 30-day moving average yesterday. This is an indication of a possible trend reversal. However, it is still early to conclude that the bearish trend is over as the index needs to break above the immediate resistance level that we mentioned a week ago at 1,765 points. Furthermore, the index is still below the Ichimoku Cloud indicator. A break above the immediate resistance level could change the bearish indication.

Most momentum indicators such as the RSI and Momentum Oscillator have rebounded to its middle levels. This is another indication of a possible reversal. Furthermore, the FBM KLCI has climbed above the middle band of the Bollinger Bands indicator. Therefore, the momentum indicators are also at a crossroads. The index is either going to climb higher and break above the immediate resistance level or the bears may take the opportunity of the current rebound to start selling again.

Failure to break above this level would send the index back to test the immediate support level at 1,710 points. Fundamentally, falling crude oil prices and a weakening ringgit may still weigh down the market. 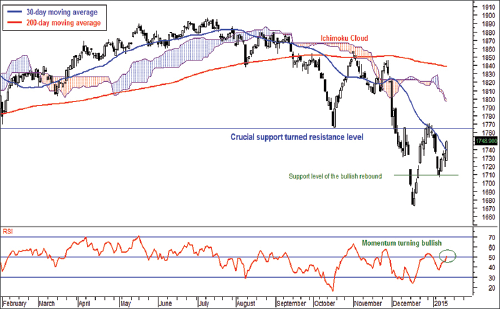