Market may rebound this week

GLOBAL markets, especially in this region, were in a buying frenzy and indices climbed to multi-year highs. However, the local market did not share the same sentiment as it was weighed down by a weak ringgit. Last week, I mentioned that the FBMKLCI was expected to pull back and should be supported at 1,840 points. The FBMKLCI fell for five consecutive days in the past week and declined 0.9% in a week to 1,839.61 points yesterday.

Trading volume has slightly declined on the market being cautious and worried about the depreciating ringgit. The average daily trading volume in the past week was 2 billion shares compared with 2.2 billion two weeks ago. However, the average daily trading value increased to RM2.1 billion from RM1.9 billion two weeks ago. Foreign institutions continued to provide support to the market despite the decline.

The US Dollar Index increased from 96.96 points a week ago to 99.77 points. Hence, the Malaysian ringgit weakened against the green-back from RM3.63 per US dollar last week to RM3.70. COMEX gold was pressured by the stronger US dollar and declined 1.2% in a week to US$1,199.20 (RM4,437.04) an ounce. Crude oil (Brent Crude) increased marginally from last week to US$59.60 per barrel. Crude palm oil futures on Bursa Malaysia declined 2.7% in a week to RM2,149 per tonne on higher output expectations.

The market is still in a bullish trend despite the decline last week. It is more of a correction than selling pressure. The FBMKLCI is still above the short-term 30-day moving average and this indicates that the trend is still bullish. Furthermore, the index is also above the Ichimoku Cloud indicator.

Momentum indicators like the RSI and Momentum Oscillators declined last week but were still above their mid-levels. The MACD indicator is declining as well but is still above its moving average. In addition, the Bollinger Bands are tightening but the index is above the middle band. This indicates that the trend is still bullish but weak.

The FBMKLCI is currently at the immediate support level at 1,830 points. Failure to rebound from this level could indicate lack of market confidence and the index may fall to the next support level at 1,780 points. However, the index has already fallen for five days without indicating selling pressure and there is a high chance that the index is going to rebound this week. Immediate resistance is at 1,856 points.

Technology and construction stocks could be the main focus this week as these two sectors’ indices have outperformed the FBMKLCI. In addition, second-liners could also be in focus when blue-chips take a breather. 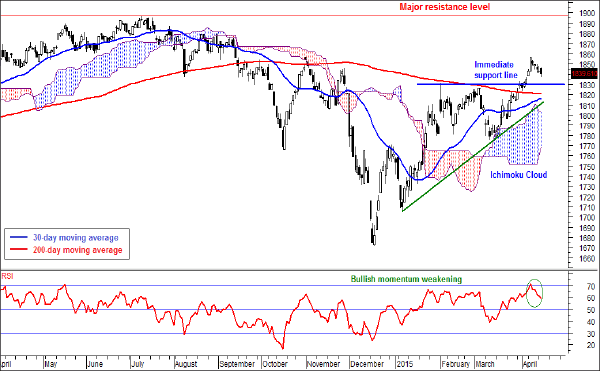