The merger follows the acquisition of MAAKL by MAMSB’s parent company, Manulife Holdings Bhd, from MAA Group Bhd last year. It marks the full consolidation of both asset management firms into a single entity that retains the MAMSB name.

In an interview with The Edge, Wong Boon Choy, formerly CEO of MAAKL and now CEO of MAMSB, says the group will be able to grow further as a merged entity under Manulife. 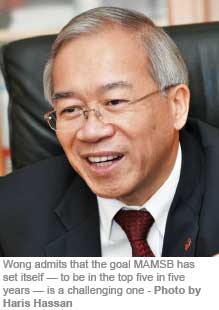 “In those days, MAAKL couldn’t grow its footprint much because of a lack of financial resources. Now that we are under Manulife, we can.

MAAKL’s unit trust advisers have long been using the software applications, which have differentiated the company from its competitors over the last 10 years.

“With Manulife behind us, we have the financial support and a large team of IT experts (to support MHO),” Wong says.

The enlarged MAMSB is now the sixth largest in the asset management industry with a fund size of RM2.9 billion as at July 31.

However, it is still far behind its fifth-place competitor, which has a fund size that is three times larger. Wong admits that the goal MAMSB has set itself — to be in the top five in five years — is a challenging one.

“It is not impossible, but it is challenging. The thing about [goals] is that they are a moving target.”

Wong says it is all about organic growth for MAMSB from here on. It is expanding its distribution channels to include banks, independent financial advisers and more new branches instead of relying solely on the agency force, as it used to previously.

With the addition of MAAKL’s agents, MAMSB has a total of 1,500 and is looking to double this number in five years.

Apart from the unit trust business, that there is also the private retirement scheme (PRS) business that the asset management firm is looking to grow with the additional agency force from MAAKL.

PRS is a voluntary investment scheme that was initiated by the government in 2012. As at July 31, the total PRS fund size in Malaysia stood at RM400 million whereas Manulife’s PRS fund size was only RM11 million.

Prior to the acquisition of MAAKL, MAMSB took a business-to-business (B2B) approach to promote its PRS funds. Its strategy was to target small and medium enterprises that could provide PRS as an additional benefit to their employees.

However, the firm soon found it takes a longer time to get companies on board compared with individuals.

While it has not abandoned the B2B approach, MAMSB will now be focusing on the individual market, with its 300 or so PRS advisers.

Wong sees PRS funds continuing to grow at a rapid rate [in the medium term], given the segment’s current low base, and as more unit trust advisers qualify as PRS advisers to promote the products.

However, he has not yet set next year’s growth target for the PRS fund. “A lot of sales will come in December because of the tax relief (for PRS investments to a maximum of RM3,000). But we are slowly educating investors not to do that because they may miss the [tax filing] deadline.”

Wong says one of the ways the government could encourage more people to invest regularly in a PRS fund instead of investing a one-off sum as has been the case over the past year, is to make tax relief conditional on monthly PRS instalments.