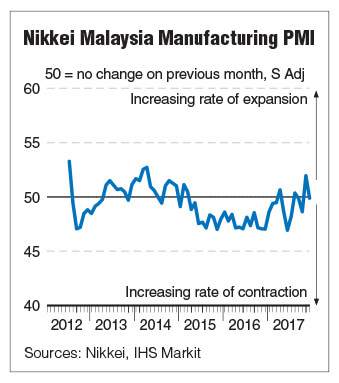 KUALA LUMPUR: Malaysia’s manufacturing sector is expected to continue expanding this year after a growth of 5.7% in 2017, analysts said, supported by China’s inventory rebuilding and strong demand from Europe and the US.

This is despite the headline Nikkei Malaysia Manufacturing Purchasing Managers’ Index (PMI), a composite indicator of manufacturing performance, falling to 49.9 in December 2017 from a reading of 52 in the previous month, the strongest growth in over three-and-a-half years. This signalled a stagnation in business conditions in the local manufacturing sector at end-2017. A PMI reading under 50 represents a contraction.

“The fall in the headline PMI was driven by a contraction in new orders,” IHS Markit, which compiles the survey, said in a statement yesterday.

CIMB Investment Bank Bhd head of economics Michelle Chia said there is no cause for alarm over the Nikkei PMI’s December data and she doesn’t see the downward pressure persisting.

“The decline in PMI is unlikely to persist as it was mainly driven by a contraction in new orders as there were no smartphone or iPhone launches in September, October and November. The indicators are still positive going into 2018,” she told The Edge Financial Daily.

“It is also a seasonally weak period heading towards the Chinese New Year. We should ride through this stagnation [period]. The fluctuations [in growth] would be driven by product launches.”

According to Semi, a 30% rise in manufacturing equipment billings in the third quarter of 2017 (3Q17) will continue to buoy Malaysia’s manufacturing figures this year.

“Having said that, the International Monetary Fund’s global economy forecast for 2018 was raised to 3.7% from 3.6% in 2017,” he said. “In Malaysia, we expect the manufacturing sector to grow slower due to a slowdown in China’s inventory rebuilding unlike that seen in 2017.”

Slower imports are expected in China following the government’s move to place controls on growing debts that led to slowed credit growth. This is likely to dampen inventory build-ups in palm oil, electrical and electronics (E&E) and other raw materials.

“For us, the slowdown in 2018 would not be sharp as it will be cushioned by strong domestic consumption in consumer-related industries including food, transportation and construction,” said Tan.

“On the supply side, we are expecting a 5% growth. This comprises the agriculture, mining [involving chemical and petroleum-based products] and E&E segments. Demand for E&E products could come from the robust automotive segment.”

Tan said 2017 was an exceptional year vis-a-vis Malaysia’s growth of 4.9% in 2015, and 4.4% in 2016. Based on the Nikkei PMI, Tan said Malaysia would benefit from sustained new export orders as domestic manufacturers turn slightly more positive in line with improving business conditions in the global manufacturing sector.

“We expect Malaysia to benefit from sustained new export orders from abroad, though at a slower pace compared with that in 2017, especially in the E&E sector,” he added.

The international trade and industry ministry also revealed that total trade in October 2017 surged 19.8% to RM154.26 billion year-on-year (y-o-y), while exports broke the RM80 billion mark for the third time in 2017, climbing 18.9% to RM82.41 billion. Trade growth was mainly supported by Asean, China, the US, Hong Kong, Japan, the European Union (EU) and Taiwan.

Exports of manufactured goods grew 19.5% or RM11.11 billion to RM68.07 billion, representing 82.6% of Malaysia’s total exports, mainly due to higher exports of E&E and petroleum products, making up 54.8% of the total manufactured exports.

Between January and October 2017, exports grew 21.1% y-o-y, mainly driven by healthy global demand which boosted export volumes and a recovery in commodity prices.

An economist with an investment bank here said the weak technology line-up going into 2018 may slightly dampen the E&E manufacturing growth prospects for Malaysia.

“Relatively, 2018 would be good despite a moderation from 2017 — a high benchmark. That does not mean external demand would drop because the demand for Internet of Things and a surge in electronic automotive parts would continue to support our E&E manufacturing sector,” the economist said.

Growth is also expected from continued diversification and facility expansion by Petroliam Nasional Bhd of its downstream segment at the Refinery and Petrochemical Integrated Development project, the economist added.

On China’s credit control, the economist does not believe it would take an extremely stern stand that could injure trade. “China has always been careful not to ‘over’ tighten policies. There would be some moderation and demand from there.

“However, the slowdown in China would be offset by other Asian nations as their gross domestic product remain strong going forward,” the economist noted.

Nevertheless, the economist highlights increasing labour costs and higher oil prices as downside risks that could impact the cost of doing business in Malaysia, particularly for small and medium enterprises (SMEs).

For Tan, the downside risks involve geopolitical risks from Saudi Arabia’s political turmoil due to graft investigations and its disengagement with Iran, and North Korea’s war threats.

These are exacerbated by the uncertainty of Brexit, as well as elections in several European nations that could impact the economy along with the monetary policy decisions in the US and China.

“We are not sure if [the] incoming US Federal Reserve (Fed) chairman Jerome Powell will continue with (former Fed chair) Janet Yellen’s policy of gradually increasing the interest rate. If the US increases the rate aggressively, we can expect high capital outflows,” he said.

“We are also unsure of Bank of China’s credit limit measures as that would affect growth expansion. These are some of the risks that we expect to encounter next year.”

Tan has a “neutral” call on the technology sector, expecting it to benefit from the demand of value-adding in the smartphones segment. He believes the construction and oil and gas segments would benefit from a steady economic growth due to positive improvements in commodity prices.

“This is in tandem with the anticipated heavy investment in fabrication equipment in upcoming years. In the immediate term, we expect the global semiconductor sales to continue recording positive sales growth on a year-over-year basis.

“Our view corroborates with the recent upgrade in sales forecasts by the World Semiconductor Trade Statistics (WSTS) organisation,” he said in a Dec 6 note to clients.

Foo said WSTS recently revised its 2017 sales figure upwards to US$408.7 million (RM1.64 billion) from US$377.8 million, an upside of 8.2%. “Although capital spending on semiconductor equipment in North America has been posting double-digit growth for more than a year since October 2016, billings have been tapering off for the past four consecutive months, in line with seasonal weakness.”