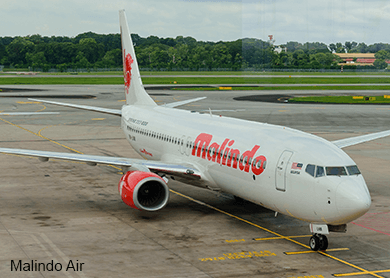 On its part, the hybrid airline has "ambitious plans" for 2015 where it will look at aggressively expanding its brand presence in the region.

"By taking delivery of more aircraft orders, we’re poised to introduce more routes to our widening network in the coming months, strengthening air travel demand within the region," said Chandran in a statement today.

"We will also be introducing strategies to increase ancillary income as well throughout 2015,” he added.

“While we very much focused on expanding ATR (turboprop) operations this year, we’re looking to enhance our capacity and route network further to include Boeing (jet) operations," said Chandran.

Malindo Air will start daily flights from Kuala Lumpur to Kathmandu, Nepal on Feb 6 next year, bringing its total number of international destinations to 18.

"The new route will be operated using a brand new Boeing 737-900 and will depart from klia2 daily at 7:05pm and arrive at Tribhuvan International Airport at 9:30pm local time. The return flight will depart Kathmandu at 10:20pm and touch down at KLIA2 at 5:15am local time," said Malindo Air.

Ticket sales are open from today, with one-way economy class fare starting from RM399 and RM649 for business class.

Chandran said the introduction of the new route and others planned for 2015 will propel the carrier’s position for the new year.

“Our recent launch of flights to Singapore and newly doubled flight frequency to Bangkok has received enthusiastic response from the public. Our new daily flights to Bandung will also be starting soon on Dec 19 and sales already look promising.

"With route expansion into Kathmandu, we are optimistic of capturing a bigger market to further enhance our network and brand,” he added.