Malaysia
Corporate
From The Edge
Aviation 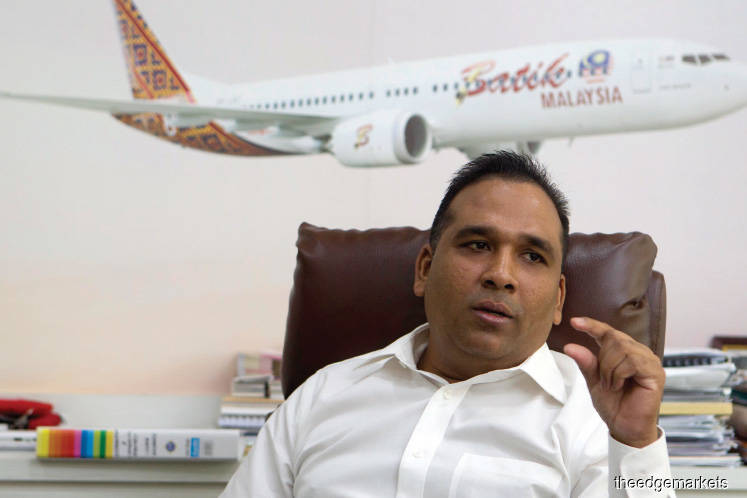 While the first two have made some splashy news and big announcements, Malindo Air has mostly stayed below the radar, quietly building its network — earlier out of klia2, and three years later at the Kuala Lumpur International Airport. The full-service airline has also expanded into the turboprop segment, which it operates out of the Sultan Abdul Aziz Shah Airport in Selangor.

From a two-destination operation (Kuala Lumpur-Kuching and Kuala Lumpur-Kota Kinabalu) five years back, Malindo Air now has a network of 57 destinations across 16 countries.

But the airline’s 39-year-old chief executive officer vows to bring the airline to profitability in the next three years.

Chandran Rama Muthy, who has held the reins at Malindo Air since its inception in 2013, hopes to achieve this by riding on industry growth, continuous cost discipline and synergies with the airline’s Indonesian shareholder Lion Group.

While Chandran conceded that higher jet fuel prices and the ringgit’s weakness remain a challenge for the sector, he also expects rising crude oil prices to bring better economic growth, which would boost air travel.

“Looking from another perspective, higher oil prices are good for the country’s income. As such, we hope there will be more economic activities, people will have more disposable income, which in turn will boost travel,” he said in an interview with The Edge Financial Daily last week.

The airline is also hit by a weaker local currency, as while it earns in ringgit, 67% to 70% of its costs like fuel, airplane leases, insurance and spare parts are billed in US dollars. YTD, the ringgit had weakened by 2.76% to close at 4.1305 last Friday against the US dollar.

“It (2018) is a challenging year, but we do not depend on a single market. Our presence in multiple countries helps [to ease the impact of currency fluctuations]. The industry is very dynamic. Whenever we see there is an opportunity to maximise our revenue, we will go for it,” said Chandran.

The airline is still in ‘investment mode’

There is no stopping Malindo Air as it looks to continue expanding its business. The airline is looking to expand its operations to destinations in India, Pakistan, China and Australia.

Chandran said the airline is still in “investment mode”, noting that its cash flow had also seen “good” improvement.

A check on the Companies Commission of Malaysia’s data showed that Malindo Air’s current assets had increased to RM319.78 million as at FY17, from just RM319,587 in FY16.

Revenue also surged to RM2.09 billion from RM1.38 million during the same period.

Chandran said that this year, Malindo Air is targeting to carry seven million passengers, which is equivalent to a 10% growth from the airline’s passenger volume of over six million in 2017.

However, he declined to reveal the reason for Nadi’s exit.

Nevertheless, the affiliation with the Indonesian airline group has allowed Malindo Air to have better cost management due to the synergies between the two parties.

“We are leveraging on Lion Group’s facilities when it comes to aircraft financing, procurement of spare parts, its maintenance, repair and overhaul capabilities in Batam, as well as its simulator training centre in Jakarta. So cost-wise, we are very disciplined; we save wherever we can as a group,” said Chandran.

Malindo Air also hopes to tap into Lion Air’s 60 million passengers a year. “If we can tap into just 1% of their market, we are very happy,” he said.

“Next year, we are looking to add another six Boeing 737 MAX 8s and two more ATRs through an operating lease with Lion Group. Our capacity expansion is around 10% to 15% every year,” said Chandran.

Meanwhile, passengers of Malindo Air may begin to notice a new look and brand gradually sweeping the airline as it moves forward with a rebranding effort that Chandran said began two years ago.

“With the name Batik Air Malaysia, it will give passengers an impression that we are under one brand. They will be more comfortable when they connect between two or more flights under Batik Air. We see prospects in connecting more flights out of Indonesia rather than Singapore’s Changi Airport [going forward],” he said.

Chandran noted that Malindo Air, which had positioned itself as a hybrid airline when it first entered the Malaysian market, no longer does so to avoid brand confusion.

“We think it is better to focus on growing our business rather than spend money to educate people on what is a hybrid airline. We offer frills like baggage allowances and in-flight entertainment, so we fall under the category of a full-service airline,” he said.

He is unfazed by competition from its more-established counterparts including Malaysia Airlines, Singapore Airlines, Cathay Pacific and Emirates in the premium market, saying there are many subsegments and that the market is big enough for everybody.