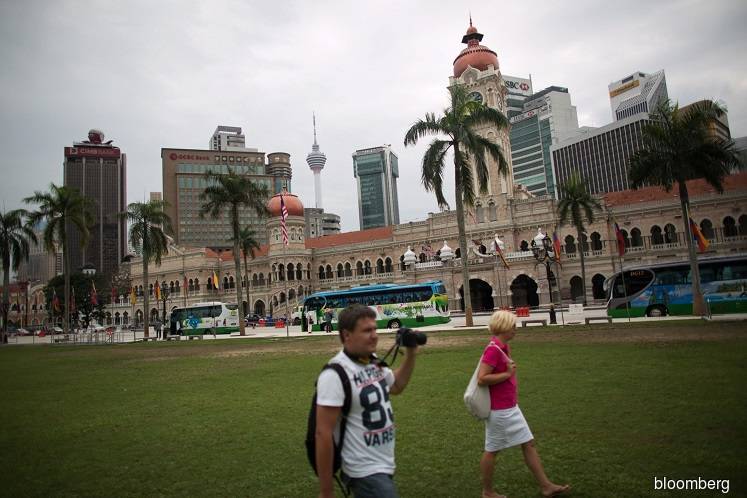 In a statement, the Department of Statistics, Malaysia said imports increased marginally at 0.5% from RM179.9 billion in 2018 to RM180.7 billion led by outbound activities and business services.

It said the trade balance continued to register a deficit for the past eight years after registering the last surplus in 2011.

Chief Statistician Datuk Seri Dr Mohd Uzir Mahidin said the exceptional performances of exports and lower imports of construction activities have contributed to a narrower trade deficit in services to RM10.9 billion against RM17.5 billion in 2018, the lowest since 2015.

Mohd Uzir said that travel remained as the largest component by contributing almost half of total exports with 48.4% share or RM82.1 billion.

He said this is in line with the number of tourist arrivals to Malaysia that boomed over the years to record 26.1 million in 2019, precisely from Singapore, Indonesia and China that witnessed a significant growth in tourism spending mainly on shopping, accommodation and food and beverages.

At the same time, with the flourishing travel industry globally, there were no exceptions for Malaysians to travel abroad with the trend eventually becoming a lifestyle among the middle- to higher-income groups, he said.

Meanwhile, he said, following the slowdown in construction activities due to completion of megaprojects related to oil and gas and civil engineering as well as the absence of new megaprojects caused a substantial drop in imported construction materials and services from abroad.

"This scenario backed the narrowing in trade deficit of services," he said.

Mohd Uzir said the improved exports in services were also supported by the rising international air passengers with the expansion of low-cost carriers and direct flights to international routes throughout 2019 resulting in higher air transport exports of RM12.7 billion.

He said that in addition, sea transport expanded to RM7.1 billion supported by higher merchandise exports for freight.

"At the same time, imports of transport decreased due to the continuous decreasing activities in freight. Overall, transport performed well and registered a lower deficit at RM25.9 billion compared with RM27.7 billion in 2018.

"Business services performed quite well in 2019 contributed by higher exports in management and consulting; architectural, engineering and technical services and accounting services," he said.

He said the leading markets for travel were Singapore, China and Indonesia, while exports of manufacturing services were mainly to the US. As for India, the exports were predominantly on transport activities.

"In 2019, the top importing countries were from Singapore, China, the US, the UK and Thailand.

"The payments to Singapore, China and Thailand were mostly for travel while payments to the US and the UK were primarily for business services," he said.

Malaysia traded with 193 countries across the world with 82 countries recording surplus, while 111 countries displayed a deficit.

Over the years, Singapore has always been the top surplus contributor, however in 2019, Indonesia leapfrogged with a value of RM9.2 billion, followed by India and Singapore, said Mohd Uzir.

Going forward, Mohd Uzir said Malaysia may see lower exports of services in 2020 amid the cloud of uncertainty due to the Covid-19 pandemic and the implementation of the Movement Control Order.

"All this while, Malaysia's service exports were too concentrated on travel but with the new norm of Covid-19, the tourist and hospitality industries may severely be affected this year.

"Thus, diversifying and identifying the niche industries are pertinent in the current scenario to withstand Malaysia's exports of services," he said.