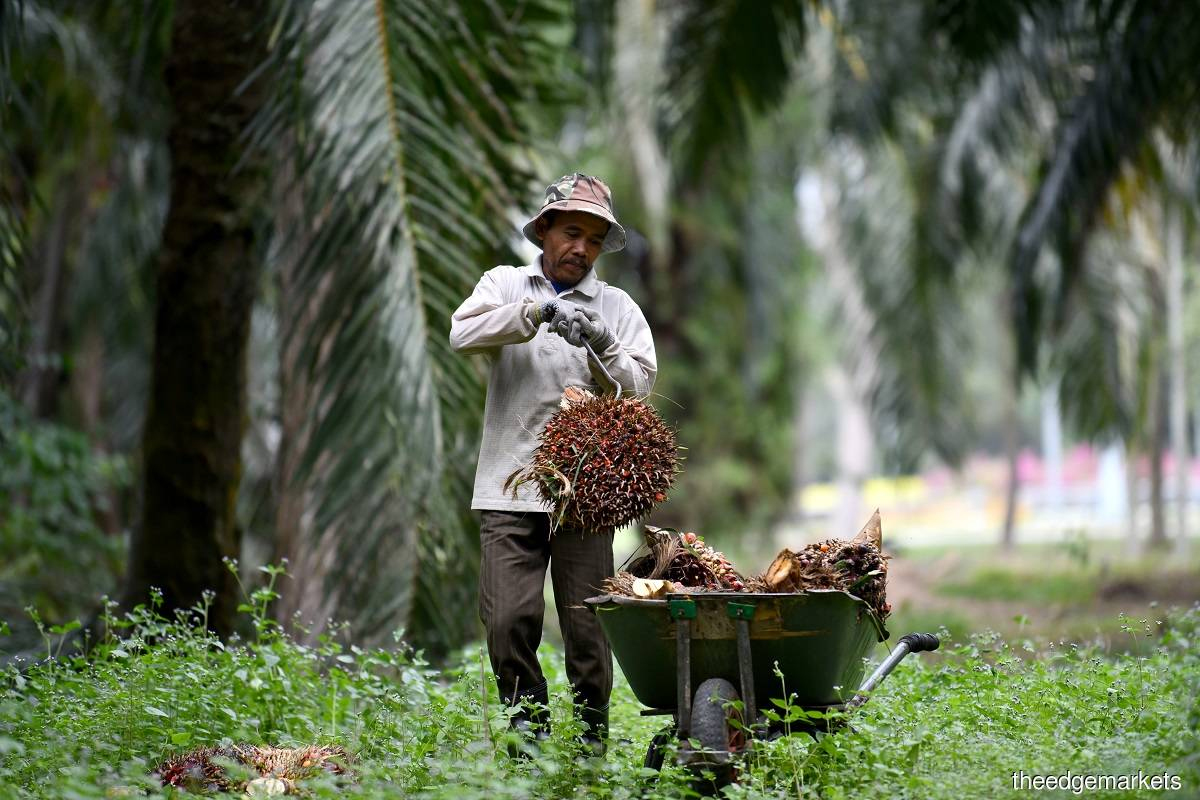 Malaysia recorded an FFB yield of 16.73 tonnes of oil per hectare last year compared with 17.19 tonnes and 17.89 tonnes in 2018 and 2017 respectively. The indicator peaked in 2017 before the current downward trend.

“We should be achieving 25 to 26 tonnes/ha with the planting materials we have. Looking at the yields, something is obviously wrong,” says Jeffrey Ong, past president of MEOA.

The problem is that the fruit is not being harvested, as oil palm estates dependent on foreign workers struggle with a shortage of manpower under a prolonged freeze on hiring by the government due to Covid-19, while locals shun working in plantations.

“The labour shortage is very acute now and has created a big impact on the smallholders and even the big boys, who are not enjoying the good CPO prices now. It’s a real waste,” says Datuk Nageeb Wahab, president of the Malaysian Palm Oil Association.

Ong says most estates in the country are not only facing a shortage of harvesters, they also do not have enough general workers to apply fertiliser, clear overgrowth or remove decaying fronds from the trees. He points to a pre-MCO survey undertaken by the Malaysian Palm Oil Board (MPOB) that showed a shortage of 31,021 harvesters among respondents, which covered 76% of the industry.

According to MEOA, based on a conservative estimate of productivity per harvester of 1.5 tonnes of FFB a day at 280 working days a year, the crop loss amounts to 17.143 million tonnes a year or close to a 20% loss in yield. This translates to a loss in production of 3.429 million tonnes of crude palm oil (CPO) and 857,000 tonnes of palm kernel a year.

As for hiring locals, Ong laments that the success of the country’s education system has resulted in the youth’s resistance to working on estates as harvesters or general workers. Logic dictates that local workers would prefer to take up more comfortable factory jobs, but these jobs are still being filled by foreign workers and not locals.

Meanwhile, folks in the kampungs see estate work as supplementary to earnings from their own land. “Very few work [at oil palm estates] full-time. Many generally work for pocket money,” Ong explains.

Calls to mechanise functions at oil palm estates have been heeded by the big corporations but harvesting FFB is still labour intensive, requiring specific skill sets.

“The pandemic has been an eye-opener for the industry and shows how dependent it is on foreign workers. There’s an urgent need to automate and mechanise. We’ve mechanised a lot, but harvesting FFB still requires manual labour,” says Nageeb.

Note that Plantation Industries and Commodities Minister Datuk Dr Mohd Khairuddin Aman Razali announced early last month the establishment of the Mechanisation and Automation Research Consortium of Oil Palm (Marcop) that will involve the participation of MPOB and industry players. With oil palm cultivation undertaken within 6° from the equator on terrain ranging from peat to mineral soil and swamps to hills, the use of a single machinery — such as combine harvesters for grains and oilseeds, as is the case on flatlands in the US or Australia — remains a dream for oil palm planters.

“Oil palm is a versatile and efficient crop. It can be mechanised to a certain extent, but it will take a long time to take off. The industry has to share the blame. It has to put in more effort to mechanise while the government has to realise that certain industries such as agriculture still need a certain number of manual labourers, more than other industries.

“While mechanisation is still evolving and the appropriate machines are being invented, built or improved, the government should allow the intake of foreign workers to solve the perpetual issue of labour shortage,” says Ong.

Furthermore, mechanisation works only if there is volume.

“You can’t expect one tractor to cover five acres. You need economies of scale. For smallholders, the formation of cooperatives should be the way forward to run their operations efficiently,” he adds.

Labour shortage is not a new problem facing the palm oil industry, but the crunch came last year as foreign workers who had returned to their home countries could not come back as the borders were closed and the intake of migrant workers was frozen by the government.

In a March 8 statement, 12 industry associations — including MEOA and MPOA — came together to appeal to the government to look into the three major issues of shortage of workers, high taxes and problems in market access.

The appeal followed the implementation of the new MPOB cess of RM2 per tonne on CPO and CPKO to support mechanisation and automation.

According to MEOA estimates, in 2020, oil palm growers in Malaysia paid RM5.3 billion or 30.7% of their business profit to the government in the form of MPOB cess, windfall profit levy (WPL), state sales tax (applies to Sabah and Sarawak) and income tax (see table).

For bigger estates in Sabah, the total paid was as high as 46% of their business profit. Note that Sabah imposes a CPO sales tax of 7.5% compared with 5% in Sarawak.

The tax that the industry feels most strongly about is the WPL, which the March 8 statement labelled as “eminently unfair” and called for it to be abolished. “We believe that the true test of windfall profit is return on investment (ROI), instead of profit margin. The nature of our business requires a ‘high’ profit margin in order to yield a reasonable ROI,” the statement read.

Gan Tee Jin, second vice-president of MEOA, explains that a “high” profit margin does not mean windfall profit. “In 2020, pre-tax business profit worked out to only RM2,930 per ha, which works out to a pre-tax ROI of 3.7%,” he points out.

For context, the Windfall Profit Levy Act 1998 came into effect on Jan 1, 1999, and it was only applicable to the palm oil industry.

During the Asian financial crisis, CPO prices shot up overnight when the ringgit was fixed to the US dollar in 1998. As CPO exporters were paid in US dollars, the palm oil industry was the only major sector doing well then.

“At the time, the general feeling was there was a windfall and the economy was going through a bad patch. Did the planters complain? Not in a huge way as the nation was in trouble. In a way, we didn’t mind,” says Gan.

The WPL was suspended a few years later as the economy recovered. “It [the suspension] was done by the government voluntarily,” he recalls.

In 2008, the WPL was revived to replace the Cooking Oil Price Stabilisation Scheme started by MPOB, and has been in place since.

Gan points out that the sense of unfairness felt by the industry is due to the fact that WPL is a tax on revenue — and not on profit — as it is based on the CPO price thresholds of RM2,500 in Peninsular Malaysia and RM3,000 in Sabah and Sarawak. Note that planters (with the exception of smallholders who are exempted) pay the WPL, which is based on the MPOB average price for the month, regardless of the price at which they sell their FFBs and regardless of their cost.

“In other words, WPL collections from the palm oil sector would exceed the RM400 million that the few glove manufacturers donated to the government’s Covid-19 Fund,” the March 8 statement said.

It added that if the WPL is not abolished, the current threshold of RM2,500 per tonne in Peninsular Malaysia and RM3,000 in Sabah and Sarawak should be reviewed. A revision to RM3,500 and RM4,000 respectively is seen as having a closer semblance to the notion of a windfall profit.

Furthermore, portions of the WPL should be channelled back to the industry “as reinvestment to ensure the sustainability and competitiveness of the industry”.

“The palm oil industry is the only industry paying this tax, why? The current thresholds no longer result in a windfall profit as costs have gone up from back in 1999 and 2008, when the cost per tonne was around RM1,000. Now it’s RM2,000,” says Nageeb, adding that the industry has engaged with the government on this and other issues raised.

These days, a common refrain heard within the industry is its appeal to the government to not “kill the goose that lays the golden egg”.

“The plantation industry is the only industry that has been there to bail out the nation during crises without fail, be it the recession of the 1980s, 1990s, the Asian financial crisis and even this pandemic. The hydrocarbon industry cannot perform with this consistency, as the plantation industry has. A key issue is labour and if these issues are not solved, there will be no more golden goose,” says Ong.