Malaysia's O&G players are getting more jobs, but not the financing they need

BEHIND THE STORY: Oil & gas not out of the woods yet by theedgetv 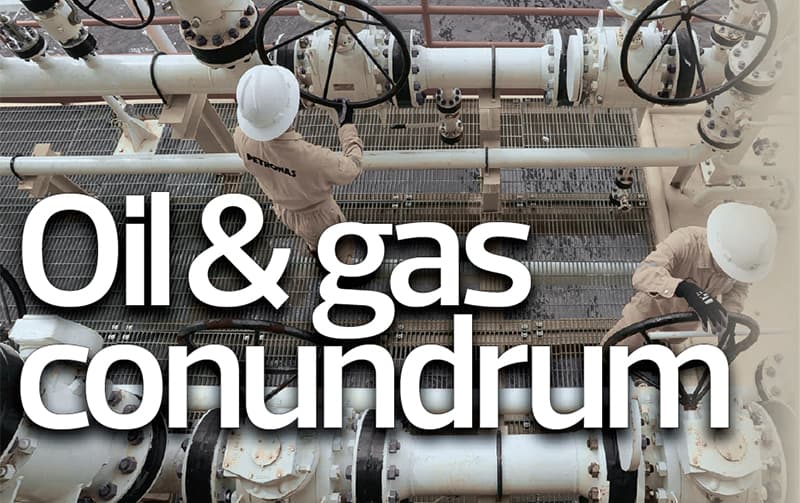 KUALA LUMPUR: Malaysia-based oil and gas (O&G) outfit De Raj Group AG just got the requisite approvals for a listing on the Frankfurt Stock Exchange in Germany -- far from home but pushed to do so because banks are just not touching oil and gas companies, according to its CEO Vaidyanthan Nateshan.

“We have bankers telling us they won’t touch oil and gas companies with a barge pole, so I’m taking the company to Europe,” he was quoted as saying in The Edge Malaysia's cover story for the week of Dec 11-Dec 17, 'Oil & gas conundrum', by senior news editor Jose Barrock.

“It’s not the equity market that is tough, it’s the debt market. We are well capitalised and need financing for executing projects. The Malaysian debt market is dead … asset cover here is 2.5 to 3 times while in Europe, it is 0.8 times," he said.

Deleum Bhd CEO Nan Yusri Nan Rahimy acknowledged that banks have been more cautious in their lending to the O&G sector in recent years. Likewise, Uzma Bhd CEO and managing director Datuk Kamarul Redzuan Muhamad said O&G companies appear to have more difficulty securing financing nowadays than when oil prices were trading at above US$100 per barrel.

“This could be because there is no indication of where the industry is going,” Kamarul told The Edge. But Kamarul highlighted that the amount of work coming on stream now is considerably more than what was available two years ago.

Singapore banks, the weekly wrote, are said to be less stringent with their clients than their Malaysian counterparts, which seems to be the case after some intervention by the Singapore government, although this cannot be proved.

As for Malaysia, the weekly wrote, citing O&G sources, that the Economic Planning Unit (EPU) in the Prime Minister’s Department, the Malaysia Petroleum Resources Corporation (MPRC) and Petronas are looking at assisting local players with their banking requirements. The EPU is headed by Datuk Abdul Rahman Dahlan, while the MPRC is an industry development agency under the Prime Minister's Department.

Though details are scarce and Abdul Rahman could not be reached for comment, one source said the requisite data will be available with the MPRC 100, which is a ranking of the top publicly traded and privately held O&G services and equipment (OGSE) companies. MPRC 100 is released either at the end of the year or in March.

“With the release of the MPRC 100, the data on how well or badly the companies are doing will be available. From what we know, it’s pretty bad … then, they (MPRC, EPU and Petronas) can act on it,” an industry player told the weekly.

In the mean time, the Petronas Activity Outlook 2018-2020, which was released earlier in the month and made public for the first time, is helping to highlight to financial institutions the availability of jobs on the local front to allay whatever fears they have, besides keeping O&G players aware of the jobs being offered.

Meanwhile, just over a year after the publication assessed the financial health of 33 listed oil and gas (O&G) companies last October, it conducted a review and found that their performance has not improved in general, according to a related story -- 'Not much improvement -- by writer Adam Aziz.

Three financial metrics to conduct the health check, namely current ratio to measure the company’s short-term liquidity; debt-to-equity ratio to assess its leverage; and interest coverage ratio to determine its ability to service interest payments on its debt.

“The problem is [high] borrowings,” said Areca Capital Sdn Bhd CEO Danny Wong. There are overhang issues, as some players cannot immediately undo the investments made when crude oil prices were high and prospects were good, he added.

To get a better look at how these companies are doing and the industry's outlook, as well as why Dayang Enterprise Solutions Bhd -- who offered RM1.16 billion to take over Perdana Petroleum Bhd in 2015 just after the oil price crashed -- thinks the worst is over, pick up a copy of The Edge at newsstands near you today.