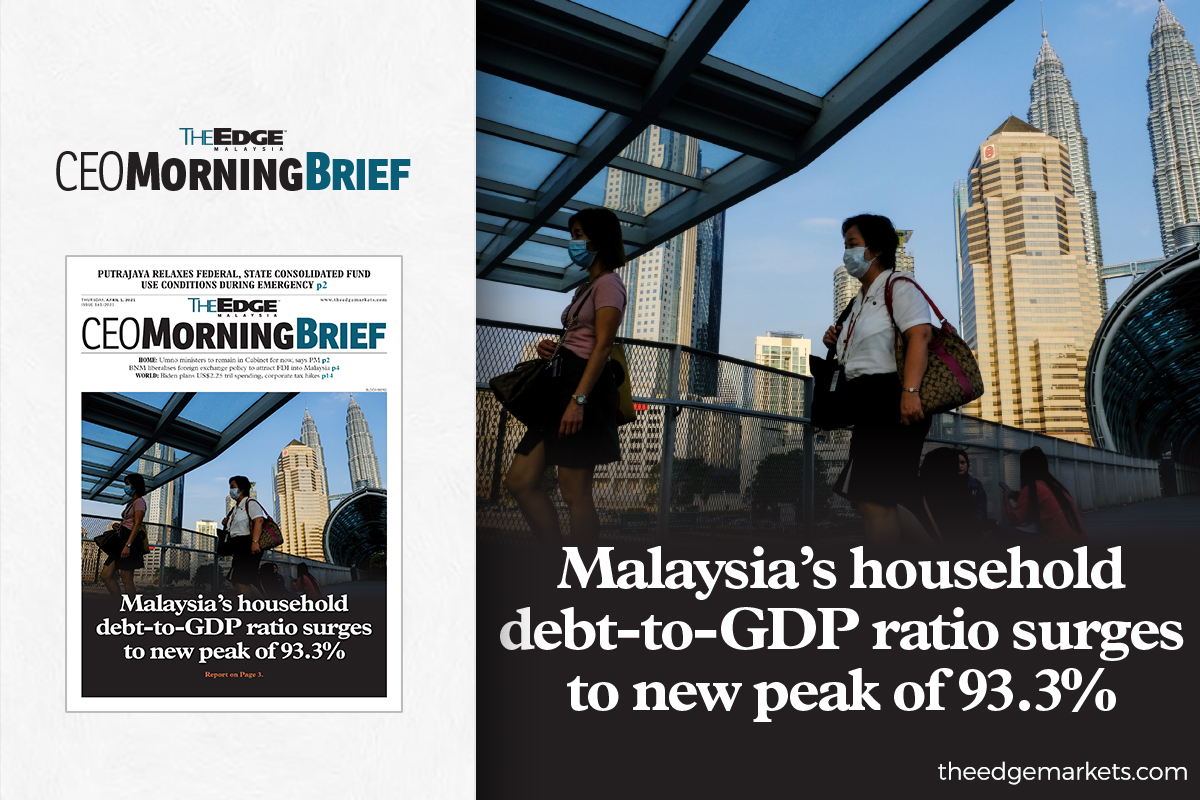 KUALA LUMPUR (April 1): Malaysia's household debt-to-Gross Domestic Product (GDP) ratio surged to a new peak of 93.3% as at December 2020 from its previous record high of 87.5% in June 2020, according to Bank Negara Malaysia (BNM).

BNM said this is mainly because growth in the nation’s household debt had normalised to pre-pandemic levels in the second half of 2020 (2H20), but the GDP remained below pre-Covid-19 levels.

"A concern over high household debt is that it may lead to a rapid deleveraging by households in the aftermath of a crisis, thus dampening or derailing economic recovery," BNM warned in its Financial Stability Review for Second Half 2020 report released yesterday.

Nevertheless, it said there has not been significant evidence of deleveraging.

And while new banking system disbursements to households reached 112% of their corresponding levels in the same period last year, these disbursements have been mainly extended to middle- and high-income borrowers (71%) who can still afford to take on more loans, said BNM.

Meanwhile, measures taken over the years to encourage more responsible borrowing have partly mitigated the adverse impact on lower-income borrowers, the bank noted. "Lending continued to be underpinned by sound underwriting standards, with stable overall median debt service ratios for outstanding and newly approved loans of 35% and 43% respectively,” BNM said.

According to BNM, household debt growth in 2H20 was mainly driven by car and housing loans, which expanded 6.1% and 7.4% from a year earlier respectively, lifted by strong response to sales and service tax exemption for the purchase of cars and various homeownership incentives.

Personal financing registered a higher annual growth of 7.1%, partly due to the suspension of repayments during the automatic loan moratorium period, BNM said.

"Recent shocks underscored the importance of households accumulating financial buffers during good times. These buffers allow households to tide over periods of economic displacement, thereby alleviating the impact on consumption and debt serviceability.

"For the vast majority of household borrowers, financial buffers remain broadly intact. Financial asset growth continued to outpace that of debt, driven by sustained deposit growth and a recovery in unit trust and equity holdings.

"This indicates that in aggregate, households still managed to grow their financial wealth during this period. Consistent with these trends, in 2H20 repayments by households in the banking system reached 93% of levels observed in the corresponding period of the previous year, indicating that most have resumed repayments,” BNM said.

“These borrowers are likely to face continued challenges in 2021 given an uneven recovery in the labour market. However, banks remain resilient against risks from the household sector even under scenarios of assumed higher unemployment and underemployment affecting more household borrowers," it said.

Should this be a cause for concern?

In the short term, economists believe this high level of household debt-to-GDP ratio is manageable and do not pose that significant a risk to the country's financial stability.

"From a macro perspective, it should not have a big impact on financial stability. Broadly, the risk from the household sector to the entire banking system remains manageable.

"BNM has taken pre-emptive measures and has the capacity to introduce further macroprudential tools if the financial environment requires it to," said World Bank senior economist Shakira Teh Sharifuddin when contacted.

UOB (M) Bhd economist Julia Goh concurred, saying the high ratio is due to weaker GDP owing to the pandemic. It is also a result of government incentives to spur purchase of cars and property ownership.

"In a way, that has aided the recovery by supporting consumption amid a low interest rate environment. Other household financial stability indicators do not suggest higher risks so far given stable household financial asset-to-debt ratios and high excess savings," she told The Edge.

However, Institute for Democracy and Economic Affairs (IDEAS) chief executive officer Tricia Yeoh is sceptical of the lower-income households' capacity to service their loans, and called on the government to reassess its policies to ensure economic recovery may be achieved without overstraining households.

Similarly, Socio-Economic Research Centre (SERC) executive director Lee Heng Guie highlighted the disproportionate impact of the pandemic on different levels of household income. "Clearly, there are segments of the household that are currently facing financial distress. My concern is for those who are highly geared, [who] will eventually go through a de-gearing process to rebuild their savings. This will in turn reduce consumption and curtail economic growth later," he said.

And if such high household debt levels persist, they may result in an unhealthy financial system that is fragile to future economic disruptions. "Over the long term, if there is another downturn, and if the high level of household debt is not addressed, then definitely there is less room for monetary policy to take effect because households are already indebted to a high level," Shakira said.

Prominent economist Dr Nungsari A Radhi said the underlying issue is economic inequality, which, if not addressed, may pose systemic risk to the whole financial system.

"The cause is inequality, of course we should worry. Besides that, this is unstable. Any shifts in income. especially for lower-income households, will put them at risk of defaulting on these loans," he said.