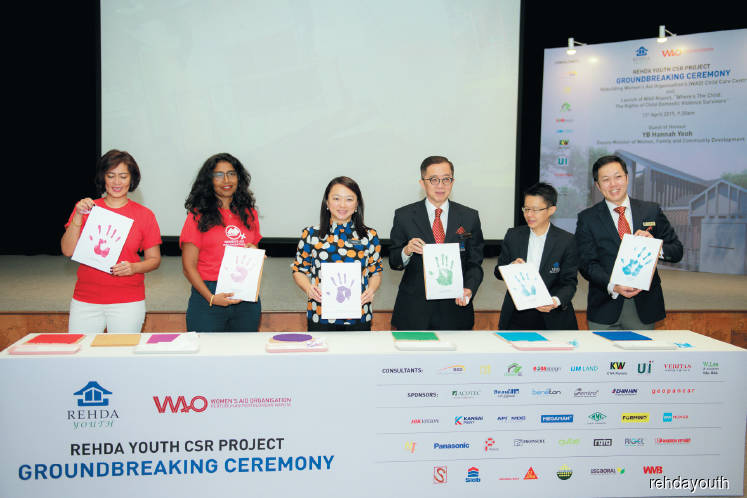 “Our goal was to design a loving and nurturing home for children, one that would not feel like a shelter or crisis centre,” said Rehda Youth adviser and GreenRE director Teo Chui Ping during the groundbreaking ceremony for the centre on April 12.

“We used green design principles such as ensuring sufficient daylight and natural ventilation. This will create a comfortable living space for children. We also designed a special child therapy room in the home,” she said.

The centre will be the first child care centre in the country to be Platinum-certified by GreenRE, a leading Malaysian green real estate certification body.

The new centre will be built on the site of the previous centre, which was destroyed by fire in 2016. WAO opened its doors in 1982 to help women and children survivors of domestic violence. The child care centre was opened in 1995 to support women in caring for their children while they get back on their feet. The new centre will be home to over 20 children.

“When children accompany their mothers to WAO’s refuge, or stay with us at the centre, the children themselves have been through the trauma of witnessing or directly experiencing domestic violence. They themselves are survivors. It is therefore critical that we recognise the children’s own needs and provide an enabling environment for them to overcome their trauma and continue their development,” said WAO president Carol Chin.

As WAO relies on donations to run the centre, Teo said it is crucial that the green features enhance the sustainability of the centre’s operations.

“To this end, we added green features to the design of the home that will reduce the cost of utility bills. With the use of LED lighting and five-star appliances, there will be energy saving of 15% to 20%. Additionally, the water-efficient taps, showers and bathroom fittings, which will be used throughout the home, will provide 15% savings in water bills,” said Teo.

The centre was designed by Veritas Design Group pro bono. According to its president David M Hashim, the design team sought to create a safe space for child survivors to learn, play and simply be children.

“Anyone who has suffered neglect or trauma requires a safe and empowering environment to recover and grow. The u-shaped form of this centre creates a courtyard at its core, a symbolic re­fuge from the outside world. And we incorporated some of the to-be-discarded masonry, wood and roof tiles from the demolished buildings on the site in the new structure.

“This up-cycling of presumed unusable material into creative new forms and purposes is also a symbolic gesture of regeneration and recovery, which we hope will inspire the users of this place,” said David.

The rebuilding of the new centre is expected to take a year.

It includes 21 case studies illustrating the experiences of child domestic violence survivors, including those who have directly experienced abuse and those who have witnessed the abuse of their mother by their father.

“The needs and best interests of the children are sometimes overlooked in the response to domestic violence. Through these case studies, which were complied based on cases from WAO and partner service providers, as well as from interviews conducted with child survivors, we hope to put the voices of the children at the forefront of domestic violence response,” said WAO executive director, Sumitra Visvanathan.

Deputy Minister of Women, Family and Community Development Hannah Yeoh performed the groundbreaking ceremony and launched the WAO landmark report. It can be downloaded at wao.org.my