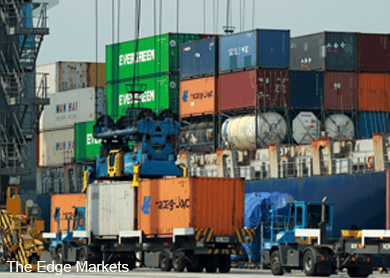 KUALA LUMPUR (Jan 15): The next six months will be crucial for Malaysian trade, in view of the uncertain global economic outlook and a slowing down in the world economy.

Speaking at a press conference after presenting Matrade’s promotional activities for this year, she said: “This is also a time for people to venture into new markets and to go deeper into markets and develop relationships that they have never had before,” she said.

Besides, it is also the appropriate time for companies to explore alternative sources for content, feedstock and components that are made within Malaysia, which would be cost effective for production.

Referring to the world economic outlook, she said: “There will be some form of moderation, I do believe so. But in any case, it is something we have to watch out in the next six months to see what is happening.

“Every other country is also carefully watching this, whether oil producing or non-oil producing countries,” she added.

Despite the more than 50% plunge in crude oil prices since June last year, the World Bank on Tuesday lowered its global growth forecast for this year to 3% and next year to 3.3% due to discouraging economic prospects in the Eurozone, some emerging economies and Japan.

The plunge in crude oil prices has also placed pressure on economies reliant on oil revenue such as Iran, Russia, Venezuela and Malaysia, as lower government revenue from oil exports is expected.

This is the main reason for the plummeting Malaysian ringgit, which hit a five and a half year low on Tuesday, trading at 3.587 against the greenback.

On the lower ringgit, Wong said the effects would be mixed for trade, as some companies stood to gain from the the falling ringgit.

“Some say the lower ringgit stimulates exports but actually, the impact of the ringgit on the Malaysian industries and exports is a mixed one,” she said.

“It depends very much on the sectors. Some sectors have primarily traded in the US$ from the beginning especially the electronics sector, whereby they buy in US$ they sell in US$ so, naturally the impact is not very significant.

“For those industries whose resources are based in Malaysia, when they sell out, they get more ringgit so for them it is absolutely positive.

“But for those industries that are very dependent on imported components and content to produce, they will be affected when the ringgit weakens because their inputs will be more expensive,” she added.

On falling oil prices, Wong said similarly, companies that rely on petroleum as feedstock stood to gain from the low oil prices, such as the plastics and petrochemical industries.

Matrade will embark on 116 export promotion programmes in 46 countries across Asia, Europe, the Middle East and the US, with an emphasis on the ASEAN region.

Among the programmes, Malaysia will host the Kuala Lumpur International Aerospace and Defence Business Convention on April 27 to April 29 this year and the Asian Oil, Gas and Petrochemical Engineering Exhibition in June.