Malaysia’s 5.9% GDP growth among the fastest in region 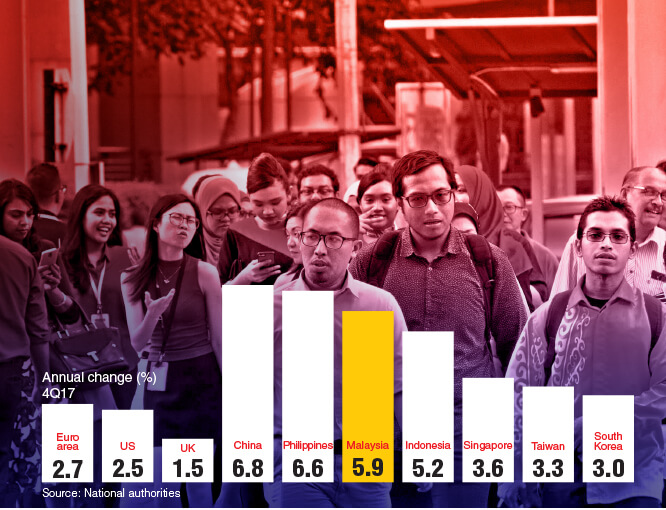 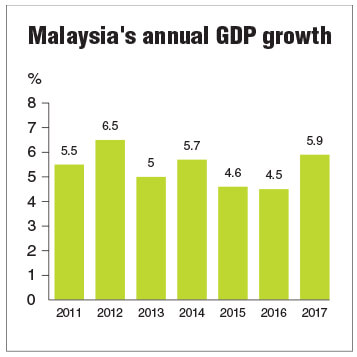 KUALA LUMPUR: Malaysia achieved an annual gross domestic product (GDP) growth of 5.9% in 2017. The growth pace is not just the fastest in three years, it is also among the top in Asia.

The full-year expansion exceeded market expectations centred mostly around 5.5%. Bloomberg’s median estimate of 18 economists was for a growth of 5.8%. Malaysia’s economic growth in 2017 was among the fastest in the region, behind China and the Philippines at 6.9% and 6.7% respectively.

The central bank attributed the robust performance to mainly demand in the private sector, with further support from the external sector.

“From the supply side, all economic sectors continued to expand, except for the mining sector. On a quarter-on-quarter seasonally adjusted basis, the economy grew by 0.9% (3Q17: 1.8%),” said Bank Negara Malaysia (BNM).

Headline inflation averaged at 3.7%, compared with 2.1% in 2016. However, the inflationary pressure moderated to 3.5% in 4Q17, from 3.6% in the previous quarter, mainly due to lower inflation in the housing, water, electricity and gas, and transport categories.

Going forward, BNM said the Malaysian economy should remain “favourable”, with domestic demand continuing to be the key growth driver.

It added that domestic demand is expected to be fuelled by the continued increase in wages and employment, new and ongoing implementation of infrastructure projects, and business optimism, coupled with favourable domestic and external demand.

On the external front, the expected faster expansion in global growth would continue to benefit Malaysia’s exports, with a positive spillover into domestic economic activity, said the central bank.

Economists believe that the growth momentum will continue this year, but the pace is expected to moderate to between 5% and 5.5%.

“Given that the global demand remains in an expansionary mode — as indicated by the Purchasing Managers’ Index (PMI) for most advanced economies — we are likely to experience continuing growth in the first quarter,” Sunway University Business School economics professor Yeah Kim Leng concurred.

MIDF Research expects the external trade sector to maintain an upbeat momentum this year, with exports growing by 9.3%, supporting further economic expansion. The research house forecast GDP to average at 5.5% in 2018.

At the lower end of the range, we have UOB Group and DBS Group Research economists expecting a 5% GDP growth, taking into account the high base effect and normalisation in global economic conditions.

“We expect GDP growth to moderate to 5% in 2018. High base effects and a tighter monetary regime, both domestically and globally, could well put a lid on growth,” said DBS senior economist Irvin Seah.

Socio-economic Research Centre executive director Lee Heng Guie cautioned that external factors, such as higher-than-expected interest rate hikes by the US Federal Reserve as well as slower growth in China, could weigh on Malaysian economy.

Given the positive growth outlook, economists believe that another 25-basis-point (bps) rate hike by BNM is possible — most likely in the second half of the year — bringing the OPR to 3.50% by year end.

“Solid 4Q17 growth does not change our view that BNM’s 25bps rate hike in January will be the only one for the year. We believe the rate hike, which reverses the 25bps cutback in July 2016, has taken into account the small positive output gap,” said Standard Chartered Bank analysts Jonathan Koh and Edward Lee in a note yesterday.