Malaysians should not stop asking questions despite risks, says lawyer 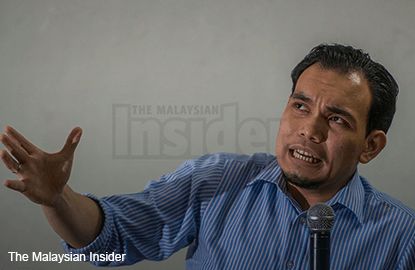 (Aug 5): With the controversy surrounding the RM2.6 billion "donation" in the prime minister's bank accounts being hotly discussed, outspoken lawyer Syahredzan Johan said Malaysians should not be afraid to ask questions.

Syahredzan, who co-chairs the Bar Council National Young Lawyers Committee, said questions needed to be asked in order to defend the principles of freedom of speech and expression.

He said the reason why laws such as the Sedition Act were being made more restrictive was to discourage people from asking questions and "to imprison the minds of citizens".

"We are saying that we have certain principles that we adhere to as a democracy. Freedom of speech and expression is part of our DNA, so we hold on to these values.

"If we don't say something because we are afraid they will come after us, then we are saying that these values are not that important to us. Do we want to be the kind of society that allows the authorities to do as they please because we fear getting into trouble?

"Don't be afraid even though the law can apply to you. You are not alone," he told a public forum on the Prevention of Terrorism Act 2015 (Pota) and the amendments to the Sedition Act 1948, organised by the Penang Bar Committee at the Caring Society Complex, Penang, last night.

Syahredzan was responding to a question by Penang Bar Committee chairman Shyama MM Narayanan Nair, who asked him whether the Sedition Act could be used against people who post remarks on social media or ask questions about issues surrounding 1Malaysia Development Berhad (1MDB) and the RM2.6 billion.

He said the Sedition Act criminalises speech with "seditious tendency", including that which would bring into hatred or contempt or to excite disaffection against the government or engender feelings of ill-will and hostility between different races, but the lawyer asked how "hatred" and "ill-will" were defined.

Syahredzan said although the amended act had done away with criminalising criticism of the government, there was still the catch-all provision that the authorities could use to go after critics.

"Technically, they cannot go after you if you question him in his capacity as the prime minister. We have nothing against (Datuk Seri) Najib (Razak) but he is being asked questions because he is the PM.

"They can use that to go after you. I am not advocating or saying don't ask questions. Some questions needed to be asked," he said.

At the forum attended by lawyers, law students and the public, Syahredzan spoke about the Sedition Act amendments earlier this year.

Among others, the amendments have made the propagation of seditious publication an offence.

"What it means now is that if you share some material about, say RM2.6 billion going into someone's accounts in your WhatsApp group, and that material is considered seditious, you might get into trouble.

"The court can now issue a prohibition order against any publication that is likely to lead to bodily injury or damage to property, or appears to promote ill will, hostility and hatred between races and religions.

"It means if authorities don't like a certain publication, like an online news portal, it can convince the court that the portal will likely or appear to commit the offence to get the prohibition order.

"Once obtained, it can be served to the publication or person for the removal of the publication. Then, the person who put up the portal will be prohibited from using any electronic device," he said

The authorities, he said, could also block access to websites by anonymous individuals through the Malaysian Communications and Multimedia Commission (MCMC).

Syahredzan lamented how the discretion of judges was now limited following the amendments.

He said there were issues against the act which Malaysia inherited from the British, including selective prosecution, arbitrary detention and its unspecific nature.

"What does hatred and ill-will mean? They are not defined in the act, which is so wide that we can have a situation where everyone will be seditious," he said.

Syahredzan said another major problem with the act was that intention was irrelevant, citing Section 3(3) which stated: "the intention of the person charged at the time he did or attempted (a seditious act)... shall be deemed to be irrelevant if in fact the act had, or would, if done, have had, or the words, publication or thing had a seditious tendency".

Lawyers defending those charged with sedition could not argue that their clients had no intention to be seditious, as the prosecution would submit that intention was irrelevant, he said.

"For the Sedition Act, all you need is the guilty act. There is no element of intention required. There is no mens rea (a legal principle stating that a person cannot be guilty of a crime if he did not have the intent to commit a crime)," he said.

Syahredzan claimed the act also made it easy for the prosecution to prove the act of sedition.

He said there had been cases showing that a person could still be found seditious even if what he said did not affect or cause any reaction from others, or was the gospel truth.

"If the words were uttered willfully or inadvertently, that is also not a defence. For the media, reporting error or correct verbatim reporting can still be seditious," he said.

He said there had been instances of the Act being used as the standard law to detain people if the authorities could not decide what other law to use, citing how politicians, lawyers, activists, journalists and ordinary people had been hauled up in recent times.

"If they cannot use Section 124 of the Penal Code, they will use the Sedition Act first to arrest. Then they will see what other offences they could use to charge.

"We have seen this happen to people like (Lembah Pantai MP) Nurul Izzah (Anwar) and (cartoonist) Zunar, protestors and the TMI five (The Malaysian Insider editors)," he said, adding that to achieve peace and harmony, there must be unity and acceptance. – The Malaysian Insider