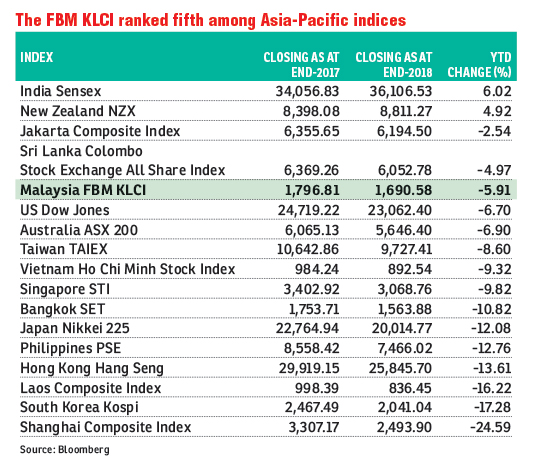 KUALA LUMPUR: Malaysian stocks ended 2018 lower but managed to outperform most regional markets for the year.

The FBM KLCI closed down 0.09%, or 1.49 points, to 1,690.58 points on Monday. Over the last 12 months, the benchmark index has lost 5.39% amid concerns over global trade, rising interest rates and plunging oil prices which also dragged down equity markets across the Asia-Pacific.

Among a basket of 17 regional indices, the KLCI fared relatively well, coming in fifth in terms of returns.

The best performer in the region was India’s Sensex which gained 6.02% over the year, followed by New Zealand’s NZX (up 4.92%), Jakarta Composite Index (down 2.54%) and Sri Lanka’s Colombo Stock Exchange All Share Index (down 4.97%).

The worst performing equity markets in the region were the Shanghai Composite Index, which fell 24.59% since the start of the year, South Korea’s Kospi (down 17.28%) and Laos Composite Index (down 16.22%).

Regional markets see-sawed throughout last year, no thanks to the US-China trade war, concerns over the US Federal Reserve’s tightening of monetary policy and China’s growth — the second largest economy in the world.

Worldwide crude oil prices also fell again towards the end of 2018, wiping out the gains made since the start of the year.

On the domestic front, conditions were also uncertain amid the change in the federal government after the 14th general election, which saw the introduction of several policy changes that affected stocks in the telecommunications and construction sectors, among others.

The cloudy conditions resulted in an outflow of funds from emerging markets to the developed markets, which partly explains the decline in most regional markets.

Inter-Pacific Research said further downside in the local stock market still cannot be ruled out in the new year.

“While foreign funds’ selling has abated, it isn’t significant enough for the KLCI to stabilise and their (foreign funds) allocations to this market remain at deeply underweight levels even more so than the levels seen in late 2016, and is currently consistent with a KLCI level of about 1,600 points,” the research firm said in its 2019 Strategy Note on Monday.

“The less aggressive pace of selling since the end of July 2018 has paved the way for domestic funds to take charge of the direction that the KLCI will take but only periodically,” it said, noting the year-end rally as an example of local funds buying in.

If corporate earnings continue to disappoint in 2019, Inter-Pacific Research sees the benchmark index falling to as low as 1,538 points in the first half of the year.

AmInvestment Bank head of equity research Malaysia, Joshua Ng, said the volatile conditions seen in 2018 may continue this year as the market is affected by lofty valuations of technology heavyweights against scale-back growth expectations, the decline in oil prices and the trade tension between the US and China.

However, he expects the KLCI to perform better in 2019 with a year-end target of 1,820 points based on forecast earnings growth of 4% and economic growth of 4.5%.

“We believe the catalyst to the local equity market in 2019 will be the return of global investors to the emerging markets on a growing consensus that the US rate increase cycle and hence the US dollar upcycle are tapering off.

“In fact, the return of global investors to the emerging markets has started since October 2018. Despite the turmoil in the global financial markets in the fourth quarter of 2018, emerging market equity funds have consistently attracted net inflows,” he wrote in its 2019 Market Strategy Outlook report dated Dec 13, 2018.

Ng said the inflows were driven by attractive valuations following the sell-down in emerging market equities throughout 2018.

While the reforms put in place by the government could still weigh on corporate earnings in the near term, Ng said, fiscal prudence should put the economy on a stronger and more sustainable footing in the long term.