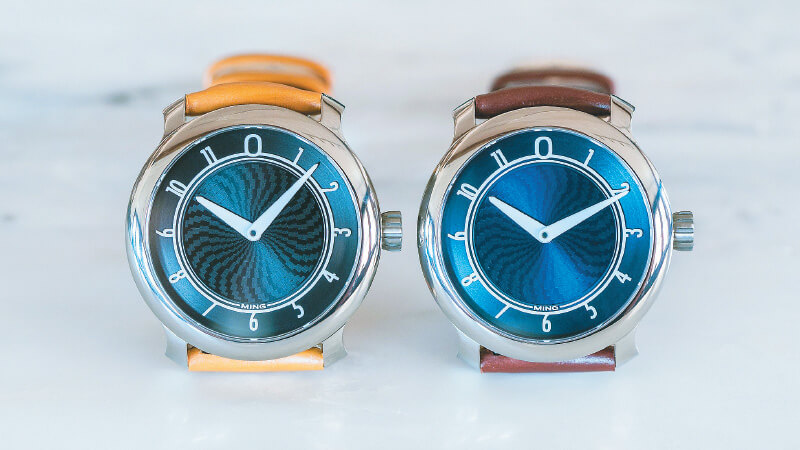 The Ming 17.01 watches were designed by well-known photographer and writer Ming Thein, who is a lifelong watch aficionado. Photo by Bloomberg

On the wrist, the Ming 17.01 is light and, thanks to the titanium case, very comfortable.

MING is a new watch micro-brand, making watches in Switzerland, but based in Malaysia. It’s also the name of one of the six founders, and the chief motivator behind the creation of both the brand and the watches: Kuala Lumpur-based Ming Thein, who is one of the world’s best known photography writers, a highly regarded commercial and fine art photographer, and chief of strategy for Hasselblad (with an academic background in physics). I’ve known him on and off for many years; he and I were both very active on what is now PuristsPro.com, in the early 2000s and though he’s spent most of his professional life in photography, he’s never lost his early and very strong interest in watches and watchmaking. Even 15 years ago, he had a deep curiosity about watch design (and very strong views on the subject) and with the launch of his eponymous brand, with two versions of the first model, he’s taken his perspectives on quality and attention to detail, and put them in horological form.

The genesis of these watches lies in his early work doing commercial photography for watch brands; he told us: “I started imagining things I’d wanted to change or have; the initial designs were all impossible mechanically and aesthetically, but something took root and there were a few notable stops along the way: external design work for a couple of the larger brands, more of my own engineering thought experiments (I am a physicist by training) and eventually, commissioning of several custom pieces. I look at the latter as ‘the experiments’ — both to see what was possible from a production standpoint, but finding the balance between feasibility, cost and aesthetic differentiation.”

Ming’s known for a lot of things as both a photographer and writer but one of the most salient characteristics of his work in both domains has always been an obsessive attention to detail; in his photography, that means not just image quality per se, but also understanding exactly what contributes to image quality (in the photography community he’s notorious for his extremely meticulous approach to lighting and composition). You can see the same devotion to getting all the little things right (right, of course, as he sees them) in the watches.

The Ming 17.01 is a limited edition in two dial variations — blue and anthracite grey. There will be 150 made of each. The watches are hand-wound, with a three-part sapphire dial; the central area of the dial carries a guilloché-like pattern that depending on the angle can either reveal its details, or appear an almost solid field of colour. Cases are in grade 5 titanium, with a back held in place by six screws. Other than the company name — which is not stamped on the dial but is rather part of the same three-dimensional element as the chapter ring and numerals — there is no lettering of any kind on the dial at all, which has been designed to display its varying optical properties with as little interference as possible. Watches are delivered with three straps, which are attached with curved quick-release spring bars, allowing straps to be changed easily.

Case construction and finishing are as carefully handled as the dial. The case and caseback are designed to hold the movement securely without the use of an internal spacer ring, and a triple gasket system allows the watch to have a 100m water resistance rating without the use of a screw-down crown. The movement is a hand-wound Sellita calibre SW210-1, which is an 11.5 ligne calibre running in 19 jewels, at 28,800 vph. Case dimensions are 38mm x 9.3mm. The decision to make a hand-wound watch is part of the reason that a screw-down crown was omitted; the later is usually not desirable on a manually wound watch (for obvious reasons).

A bit more on the movement: even though the watch does not have a seconds hand, the movement is still adjusted to five positions and put through a 250 hour daily use-simulating accuracy test. In order to help ensure optimum performance and retard deterioration of lubricants, the case has also been filled with nitrogen. Stainless steel screws are used to secure the caseback (to prevent the contact welding that can occur when like metals are used) and the movement is mated to the multipart dial and then cased, with the entire assembly process taking place in a nitrogen cabinet.

Thanks to the slim dimensions of the case, and the relatively short lugs, the Ming 17.01 wears very much like a mid-20th century wristwatch (albeit one made with very modern materials). The crown, thanks to its inverted dome design and somewhat pronounced knurling, is despite its relatively small size very easy to manipulate, making daily hand-winding of the movement very pleasurable.

Ming, on case construction, told us: “Nitrogen should theoretically do two things: firstly, minimise the amount of water vapour cased up inside the watch since the nitrogen is ‘dry’; and secondly, by reducing the oxygen content, reduce the risk of oxidation of lubricants, etc. Both factors should extend the life of the movement a bit — there is no scientific testing as to how long, but the logic is sound ... we believe it’s a bit better than not doing it.”

“100m water resistance is a function of both case and crown; the crown has three gaskets at various points, and we actually test with a margin of error — so our cases can actually do a bit more than 100m.

“All [case parts] are made in grade 5 titanium (grade 2 is not polishable to an acceptable standard because of the nature of the material). Titanium was chosen for lightness, hypoallergenic properties and wearing comfort — it has relatively lower heat conductivity than stainless steel, so the watch never feels ‘cold’ when you put it on. The caseband is a solid titanium donut without a spacer ring — it fits the movement precisely. This was done mainly for reasons of rigidity and simplicity, which allow us to reach 100m water resistance easily. It does require high precision so the movement is not loose inside the case.”

The decision to omit the seconds hand is I think indicative of the general design philosophy behind the watch; this is a timepiece designed to project a pretty optically subtle but still noticeably varied presence. Ming said: “The dial is a three-piece affair (five, if you count the location screws for the sapphire piece). The centre portion is sunray brushed with a ‘digital guilloche’ pattern printed in transparent lacquer. Next comes the peripheral ring, which is circularly brushed. Finally, we have a sapphire donut which carries the printing on its top side, and is located slightly above the dial (0.25mm) and fixed by means of two notches at 0 and — no alignment issues. The sapphire donut is anti-reflective coated.

“To reduce the rehaut height to a bare minimum, the hour hand sits in the recess created by the sapphire donut and is actually at the same height as the numbers. The minute hand sits just above that, and we don’t need any extra space. It presents an additional optical illusion: under certain light, the dial is completely flat with zero pattern or depth; it appears as high-contrast light markings and hands on a dark background. Under other light, it appears to be much deeper than the watch height.”

This effect is especially noticeable in the anthracite dial version of the watch, which is of the two the less initially compelling but perhaps the one that offers more in terms of revealing itself over time. Ming’s said that he was after the sort of optical quality in the anthracite dial that you see in the graphite of a pencil — a matte grey picked up by a kind of fine grained monochromatic iridescence (if that’s not too much of an oxymoron).

The font for the dial was adopted from an existing character set with some changes to the proportions. According to Ming, one of the most commented-on aspects of the watch so far was the decision to have the numerals from 10 to 2 standing on their feet, and 3 to 9 standing on their heads (so to speak). He said: “The whole design feel of the watch is modern but with art deco cues — the fonts had to fit this, which meant no serifs, and nothing too period like overly large bottom/top elements. Numbers should also be thin so that they precisely differentiate the time — this is also the reason all numbers are radial. On top of that, it had to be a font that wasn’t already in common use elsewhere. In the end, we landed up taking an existing font and modifying its proportions slightly.

“As for the alignments, you always view the watch on your wrist, which means the 12 side is always upwards and the 8-4 side downwards. It thus makes no sense to follow radial symmetry and alignment for these or they’d be upside down. As for 9 and 3: for left-wristers (when you check the time) your watch is probably 2pm-upwards, so 9 appears like 9 instead of 6. For right-wristers, 10 is upwards — so 3 appears correct. Unfortunately there is no way to make both correct for both left- and right-wearers, so we go with symmetry and my preference not to have 3 look like a stylised pair of buttocks most of the time.”

He also says that the use of a zero at the 12:00 position is something of a “personal crusade” and that “firstly, there’s symmetry: 0 looks more balanced than 12. Then there’s the representation of cyclicality of time. After 23.59, you have 00.00. And lastly — there’s the recursion of design elements between the 0 and all of the other rings on the dial (of which there are many)”.

These are remarkable watches, especially at the price, which is US$900 (RM3,843). The quality of materials is excellent but more than anything, you’re getting a tremendously carefully thought through product; tastes of course will vary and the design won’t be everyone’s cup of tea, but the degree of attention to detail in everything from chronometry to mechanical solidity and aesthetics is far above what one usually sees in any wristwatch, not only at this price but at any price. It’s a bit of a shame only 150 of each will be made but if the follow-up products from Ming and company have this degree of care lavished on them, we should be in for a treat.

The worst thing a watch can do is seem carelessly thought through; no one wants to wear a watch that feels perfunctory in materials or design and at this price point, it is generally very clear when you put a watch on, where sacrifices were made to maintain a certain price structure. The Ming 17.01 escapes this dilemma very neatly; they’re some of the most interesting introductions from a new brand that I’ve seen in quite a while, micro-brand or not.

For more info on the Ming 17.01 watch, check out ming.watch.

Originally published by Jack Forster on Hodinkee. Hodinkee is the pre-eminent resource for modern and vintage wristwatch enthusiasts. Through in-depth reviews, live reports and dynamic videos, Hodinkee is bringing watches to a 21st-century audience.