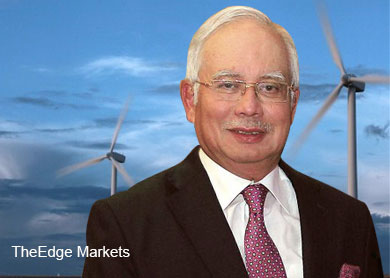 "As we transform our economy, we face substantial challenges: marrying economic development and environmental protection. Building future-proof energy infrastructure. Preparing our people and our businesses to compete in a low-carbon global economy.

"In many ways, Malaysia is a test case for the future energy economy. In less than sixty years, we’ve gone from an agricultural colony to a fast-developing modern nation. Today, we’re a key player in a 600-million strong regional bloc, home to global technology makers and the world’s oldest forests. And our growth story continues, as we prepare to become a high income nation by 2020," Najib said.

According to Najib, the country's commitment to energy efficiency had seen the nation promoting climate transparency with a new corporate emissions reporting policy.

He said policy makers had also encouraged the use of clean vehicles and rationalised fuel subsidies while supporting public transport systems designed to cut carbon emissions.

According to him, the country had reduced emissions intensity as a percentage of gross domestic product by 33% in the past five years.

"The new energy economy presents a huge opportunity. I want Malaysia to see the low-carbon future for what it is: a chance to leapfrog those who are stuck on the technologies of the past. I want us to be one of the winners in the new economy. And I think we’re starting from a position of strength.

"Countries like Malaysia are flexible and fast-moving. We see new technology as an opportunity, not a threat. A changing world is something that we like. It's something that we embrace, because it plays to our comparative advantage," Najib said.