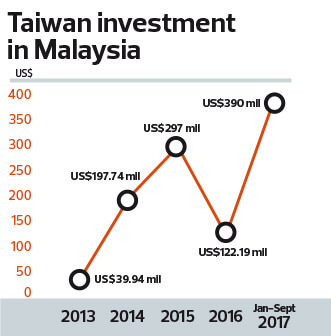 LAST year, Taiwanese companies operating in Malaysia were complaining about the shortage of labour and the weakening of the ringgit, warning that they may be forced to relocate out of the country. But the mood seems to have changed.

According to Representative James Chang Chi-ping of the Taipei Economic and Cultural Office in Malaysia, 1,700 Taiwanese companies are doing business in Malaysia and he expects more to come in the future. Kuala Lumpur is the preferred destination, followed by Penang and Johor.

“As an observer, it looks to me that they are still quite happy with the current business environment in Malaysia. Foreign labour was an issue last year, but it has been sorted out,” he tells The Edge.

Chang highlights that Taiwanese companies have been around for the last two to three decades and many have established a strong foothold in the country.

“In general, they are doing pretty well. I think the longer they are here, the more successful they have become,” says Taiwan’s de facto mission head in Malaysia.

It is interesting to note that Chang’s remarks contrast sharply with comments made by Hsu Cheng Te, the then-president of the Taipei Investors’ Association in Malaysia (TiAM), last year.

In October, Hsu had told the media that in the last two years, many Taiwanese manufacturers had been afraid to accept new orders for fear of not being able to fulfil them because of the labour shortage.

He also cited the weakening ringgit. “The ringgit has declined close to 30% (against the US dollar). Since most raw materials are imported and are paid for in dollars, many [companies] are making losses,” he is reported to have said.

Hsu had said that Taiwanese investments overseas are currently concentrated in Vietnam, Cambodia and other Southeast Asian countries, which had opened up their economies not so long ago.

Chang, however, stresses that Taiwan remains Malaysia’s fourth largest foreign investor and eighth largest trading partner. Bilateral trade between the two countries amounted to US$17.5 billion last year, which was an increase of 24% year on year, up from US$14.1 billion in 2016.

Cumulative foreign direct investment from Taiwan amounted to US$12.3 billion up until last year.

It is estimated that last year, Taiwanese investment in Malaysia more than tripled to US$390 million, compared with US$122 million in 2016 (see line chart).

This was boosted by the US$250 million reinvestment by Taiwanese electronics firm Hotayi Electronics (M) Sdn Bhd in a new facility in Batu Kawan Industrial Park, Penang.

“Next month, I will be attending the factory completion ceremony in Johor. Going forward, the trend of Taiwanese investment in Malaysia and the overall sentiments are looking good,” says Chang.

He attributes these positive numbers to Taiwan President Dr Tsai Ing-wen’s economic policies, which aim to bolster the self-ruled island’s competitiveness by shifting from an efficiency-driven economic model to an innovation-driven one.

Tsai, who was inaugurated as the first woman president of Taiwan in May 2016, had proposed a “New Southbound Policy” that would focus on multifaceted exchanges with Asean and South Asian countries, bidding farewell to Taiwan’s past over-reliance on a single market — understood to be China.

It is worth noting that there are at least 18 Taiwanese-owned companies listed on Bursa Malaysia, with a combined market capitalisation of RM6.84 billion. The notable names are Uchi Technologies Bhd, CSC Steel Holdings Bhd, White Horse Bhd, YSP Southeast Asia Holding Bhd and Superlon Holdings Bhd (see infographic on page 73).

Together, the 18 companies generated a net profit of more than RM420 million, on revenue of RM3.56 billion, according to their latest available full-year financial results.

Chang says he was told that some privately owned Taiwanese manufacturing firms are looking at listing on Bursa Malaysia — they are just waiting for the right time.

“They may be millionaires or billionaires, and their companies could be larger than some public-listed companies, but they stay humble and low-profile,” he says.

Chang says most Taiwanese businessmen and entrepreneurs are known for being hardworking, hands-on, well-educated and, more importantly, they offer sincere friendship and hospitality.

Datuk Allen Chiang Wen-chou, the honorary president of TiAM, says that over the years, Malaysia has been able to attract Taiwanese businessmen mainly due to the local Chinese population. Malaysia has a well-educated population and shares certain similarities with Taiwan in terms of the Chinese language, culture and traditions.

The only shortcoming, he says, is that the Malaysian population is not big enough to supply manpower, hence, the reliance on foreign labour.

“You need to shorten the application period [for foreign labour]. If it is too troublesome, they [Taiwanese companies] might be reluctant to come,” he tells The Edge.

Chiang, who is also the commissioner of Taiwan’s Overseas Community Affairs Council, adds that it is Malaysia’s job to make Taiwanese companies feel confident and comfortable about investing here.

“If I come here to set up a plant but there is no manpower, I would be in trouble. Yes, nowadays, people are talking about automation. But bear in mind that if Malaysia does not have an ample supply of labour, they [foreign companies] might as well go automated in their home countries,” he says.

Chiang is also the president of Inmax Holding Co Ltd, a Taiwan-listed manufacturer of industrial nails and staples, as well as pneumatic nailers and staplers with operations in Malaysia.

Chiang recalls that he initially tried to establish the business in Indonesia but it did not work out due to the language barrier.

Subsequently, Tan Sri Rafidah Aziz, the then minister of International Trade and Industry, visited Taiwan and persuaded its businessmen to invest in Malaysia.

Chiang was one of the many who was sold on Malaysia. In fact, he was the first Taiwanese businessman to set up a manufacturing plant in Seremban, Negeri Sembilan.

“We have been here for decades, and Malaysia is our second home. But we can’t deny the fact that in recent years, foreign firms are more keen to set up operations in Vietnam,” he says.