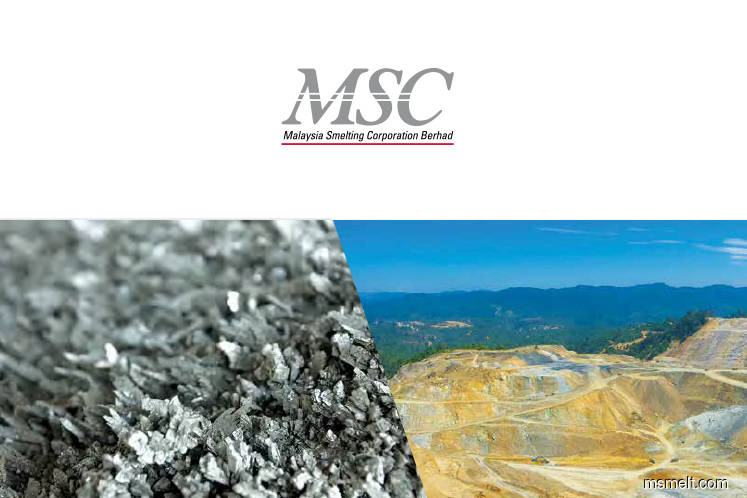 KUALA LUMPUR (May 8): Tin miner and metal producer Malaysia Smelting Corp Bhd (MSC) saw its net profit fall 63.7% to RM4.58 million for its first financial quarter ended March 31, 2018 (1QFY18) from RM12.62 million a year ago, dragged down by its loss-making tin smelting segment and the strengthening of the ringgit against the US dollar.

In a filing with Bursa Malaysia today, MSC noted that while average tin prices on the Kuala Lumpur Tin Market increased in 1QFY18 in US dollar terms, this was offset by the strengthening of the ringgit against the US dollar.

MSC chief executive officer Datuk Dr Patrick Yong said the performance of the group's tin smelting division continues to be affected by the inefficiencies of aged equipment at the Butterworth smelting facility.

"This has resulted in higher operating expenses and production costs due to lower recovery yields.

"Furthermore, operating costs have increased as the group has commenced small scale refinery work as part of our testing and commissioning process at the group's new plant in Pulau Indah, Port Klang," he said in a separate statement today.

"As we are in the early stages, we will be operating both smelters concurrently until the new smelter reaches a stable state," he added.

However, the group is confident that its performance will improve once production commences at the Pulau Indah plant and production at the Butterworth plant is phased out.

"Once the new smelter is fully operational, we expect recovery yields, production and cost efficiencies to be enhanced significantly," said Yong.