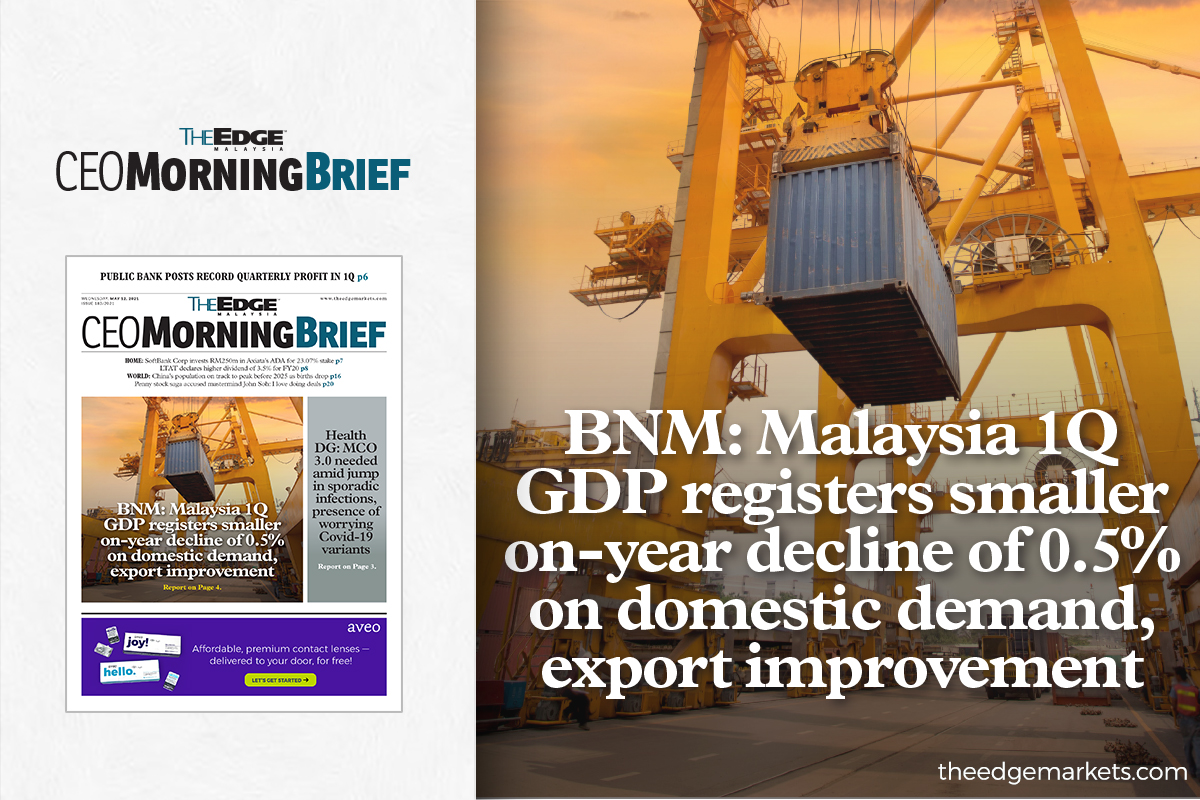 KUALA LUMPUR (May 11): The Malaysian economy, as measured by gross domestic product (GDP), registered a decline of 0.5% in the first quarter of 2021 (1Q21) from a year earlier, supported mainly by the improvement in domestic demand and export performance, particularly for electrical and electronic (E&E) products, as the country contended with the impact of the Covid-19-driven Movement Control Order (MCO) and the continued closure of international borders to curb the spread of the pandemic.

In a statement today, Bank Negara Malaysia (BNM) said all economic sectors of the country registered an improvement in 1Q21, particularly the manufacturing sector.

"On the expenditure side, growth was driven by better private sector expenditure and strong exports,

The imposition of the MCO 2.0, continued closure of international borders and restrictions on inter-state travel, however, weighed on economic activity, BNM said.

Nevertheless, as restrictions were eased in February and March, economic activity gradually picked up, according to BNM.

In the statement, which was issued to reporters covering BNM’s virtual press conference today on Malaysia’s 1Q21 GDP performance, BNM Governor Datuk Nor Shamsiah Mohd Yunus said, “The better overall performance reflects the improvement in domestic demand and the strength in our exports.”

"While the growth outlook continues to be shaped by developments surrounding the pandemic, the implementation of containment measures which are mainly aimed at curbing social activities and allow almost all economic sectors to operate would minimise the impact on economic activity,” she said.

At the press conference today, Nor Shamsiah said BNM had maintained its Malaysia 2021 GDP growth forecast at between 6% and 7.5% as the central bank does not expect the recently announced MCO 3.0 to “significantly impact” the overall growth trajectory of the nation’s economy.

“As the restrictions of the MCO 3.0 are similar to MCO 2.0, the impact on economic growth is expected to be less severe than that of MCO 1.0 implemented in 2020,” she said today.

Yesterday, Prime Minister Tan Sri Muhyiddin Yassin said in a statement on Facebook the government had decided to re-enforce the MCO nationwide from tomorrow until June 7, 2021 to curb the spread of the Covid-19 pandemic in the country.

The MCO from tomorrow until June 7 is widely known as MCO 3.0.

In BNM’s statement today, the central bank said despite Malaysia's recent re-imposition of containment measures to curb the spread of the pandemic, the impact on the country’s economic growth is expected to be less severe than that experienced in 2020, as almost all economic sectors are allowed to operate.

Overall, the growth recovery will benefit from better global demand, increased public and private sector expenditure as well as continued policy support, according to BNM.

"This will also be reflected in the recovery in labour market conditions, especially in the gradual improvement in hiring activity. Higher production from existing and new manufacturing facilities, particularly in the E&E and primary-related sub-sectors, as well as oil and gas facilities will provide a further impetus to growth.

"The roll-out of the domestic Covid-19 vaccine programme will also lift sentiments and contribute towards recovery in economic activity. Nevertheless, the pace of recovery will be uneven across economic sectors,” BNM said.

Read also:
Borrowers should engage with banks to seek right advice on repayment assistance — BNM Governor
Headline inflation to spike in 2Q21 before moderating in 2H — Nor Shamsiah