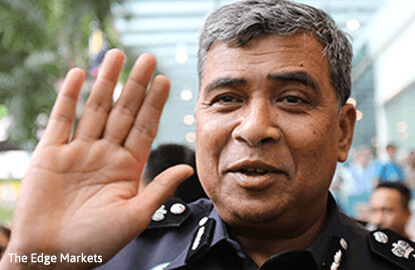 KUALA LUMPUR/UNITED NATIONS (Feb 28): Malaysia's authorities were aware that two North Korea-linked companies operated an arms business in the country and both were being struck from the Company Registry, the police chief said on Tuesday.

Reuters reported on Monday that North Korean intelligence ran an arms operation out of Malaysia called Glocom, and two companies linked to the trade were International Global System and International Golden Services.

Confirming details of the story, Malaysian police chief Khalid Abu Bakar said in a statement that both firms were being "struck off".

"We have also taken all necessary actions to comply with international regulations with regards to related sanctions," he added. He was not available for comment to Reuters.

Under a 2009 resolution, the United Nations has banned North Korea from exporting arms or related military equipment.

The police chief's statement came amid an investigation into the killing of the estranged half-brother of North Korean leader Kim Jong Un on Feb 13 at Kuala Lumpur International Airport, souring once robust ties between the two countries.

Glocom sold over 30 products related to battlefield radio equipment, according to catalogues seen by Reuters on its Malaysian website, which was taken down late last year.

The police chief said International Global System Sdn Bhd was registered in 2005 as a multimedia, electronics and general trading firm.

The U.N. report said it had asked Malaysia if it intended to freeze the assets of the two companies, and expel the North Koreans behind them. It said Malaysia had not responded to its query.

The Malaysian government did not respond to a request for comment from Reuters.

"The RMP (Malaysian police) is constantly monitoring and taking pre-emptive measures to ensure that Malaysia is not being used to carry out activities that would be detrimental to national security," Khalid said in the statement.

The U.N. Security Council met behind closed doors on Monday to be briefed on U.N. report, which monitors violations of U.N. sanctions on North Korea.

"During the consultations members of Security Council were unanimous in condemning the irresponsible and provocative DPRK’s attempts to evade the sanctions," Ukrainian U.N. Ambassador Volodymyr Yelchenko, president of the 15-member council for February, told reporters.

Yelchenko said the murder of Kim Jong Nam, the half-brother of North Korea's leader, was not raised during council discussions.

Kim was killed at a Malaysian airport by assassins using VX nerve agent, a chemical capable of killing in minutes and classified by the U.N. as a weapon of mass destruction.

Malaysia is considering expelling North Korea's envoy or shutting its embassy in Pyongyang, as tensions escalate over the killing.

The NIS also said on Monday that five senior officials of the State Security Ministry, the North Korean "bowibu" or secret police, were executed with anti-aircraft guns for "insubordination". It did not say when.

It is unclear whether the execution of the security ministry officials was related to the assassination of Kim Jong Nam.

Earlier this month, North Korea dismissed the head of the bowibu. A high-profile defector said if this was true it would be another sign of a "crack in the elite" in Pyongyang.