Malaysia to retain and prop up Sedition Act, says PM 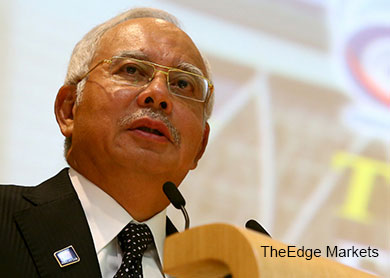 KUALA LUMPUR (Nov 27): Malaysian Prime Minister Najib Razak on Thursday bolstered a law protecting the sanctity of Islam and the country's traditional rulers, the sultans, in an about-turn to scrap a law banning criticism of the government.

Najib pledged in 2012 to repeal the Sedition Act - a relic of the British colonial era intended to keep a tight lid on racial tensions and social unrest in the multi-ethnic country - as part of a raft of liberal reforms to promote openness.

Rights groups and lawyers have criticised the Sedition Act, saying it inhibits freedom of speech.

The Malaysian leader told a meeting of his ruling United Malays National Party (UMNO) party that the act would be maintained and strengthened.

The 1948 Sedition Act, which criminalizes speech with an undefined "seditious tendency", will be boosted with additions to defend the sanctity of Islam, and penalize those who call for the separation of Sabah and Sarawak states from Malaysia, said Najib.

In a flurry of cases this year, Malaysian prosecutors have charged anti-government activists and opposition politicians with sedition. Out of more than a dozen prosecutions under the Act this year, at least five have centered on comments voiced about the sultans or their powers.

The three-party opposition, which has eroded the ruling coalition's majority in two straight elections, says the Sedition Act is being employed selectively against its members, allies and social activists to undermine the alliance .