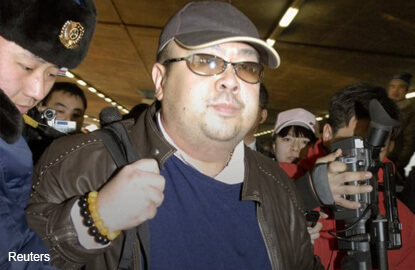 KUALA LUMPUR (March 31): Malaysian authorities returned the body of the estranged half-brother of North Korean leader Kim Jong Un on Thursday, in a deal that secured the release of nine Malaysian citizens held in Pyongyang after a drawn out diplomatic spat.

US and South Korean intelligence sources say North Korea masterminded the deadly attack on Kim Jong Nam last month using VX nerve agent, a chemical so toxic that it is on a UN list of weapons of mass destruction.

The attack outraged Malaysia and sparked a diplomatic row with the Democratic People's Republic of Korea (DPRK), as North Korea is officially known, resulting in travel bans on both sides and a collapse in their long-standing friendly ties.

The nine Malaysians who were barred from leaving North Korea arrived at the Kuala Lumpur International Airport early on Friday, where they were received by the foreign minister and large group of media who had waited overnight.

"We won't deny that when the DPRK government imposed the travel ban which prevented (us) from leaving, we were very concerned especially since we had committed no wrong," said Mohd Nor Azrin Md Zain, a counsellor at the Malaysian embassy in the North Korean capital.

"During that time we were not particularly harassed by DPRK authorities. We were given the assurance that life could go on as normal," he added.

"Following the completion of the autopsy on the deceased and receipt of a letter from his family requesting the remains be returned to North Korea, the coroner has approved the release of the body," Malaysian Prime Minister Datuk Seri Najib Razak said in a statement.

Najib is currently on an official visit in India but officials said he was directly involved in the negotiations.

Najib's statement did not mention Kim by name. Pyongyang has maintained that the body was that of Kim Chol as stated in his passport, and not Kim Jong Nam.

Kim was assassinated at Kuala Lumpur airport on Feb 13.

The swap agreement brings to an end nearly seven weeks of diplomatic standoff between the formerly friendly countries.

North Korea had been demanding the handover of Kim’s body and that three remaining suspects inside its embassy be returned to Pyongyang in exchange for an end to the travel ban on Malaysians, diplomatic sources have said.

Local media reports said at least two of those suspects, including a North Korean embassy official, had left Malaysia. North Korean officials were seen leaving the airport in Beijing on Friday morning, but Reuters could not verify if the officials were among them.

Kim Jong Nam, the eldest son of the late North Korean leader Kim Jong Il, had spoken out publicly against his family's dynastic control of the isolated, nuclear-armed nation.

The young, unpredictable Kim Jong Un had issued a "standing order" for his elder half-brother's assassination, and there was a failed attempt in 2012, according to some South Korean lawmakers.

Malaysian police say Kim was killed by two women who smeared the super toxic nerve agent VX on his face. An Indonesian woman and a Vietnamese woman have been charged.

North Korea reacted angrily when the Malaysian authorities identified North Korean suspects and sought to question others including a diplomat at their embassy in Kuala Lumpur.

Malaysia expelled North Korea's ambassador for being "diplomatically rude", although Najib later said that ties with Pyongyang would not be severed, in a bid to calm relations.

A statement by the North Korean government released simultaneously said both countries managed to "resolve issues arising from the death of a DPRK national" in Malaysia at a meeting in Kuala Lumpur.

"The importance of bilateral relations was reaffirmed. In this connection, both countries agreed to positively discuss the re-introduction of the visa-free system and work towards bringing the relations to a higher level," read the statement from North Korea.

Najib said on Thursday that North Koreans will now be allowed to leave Malaysia.