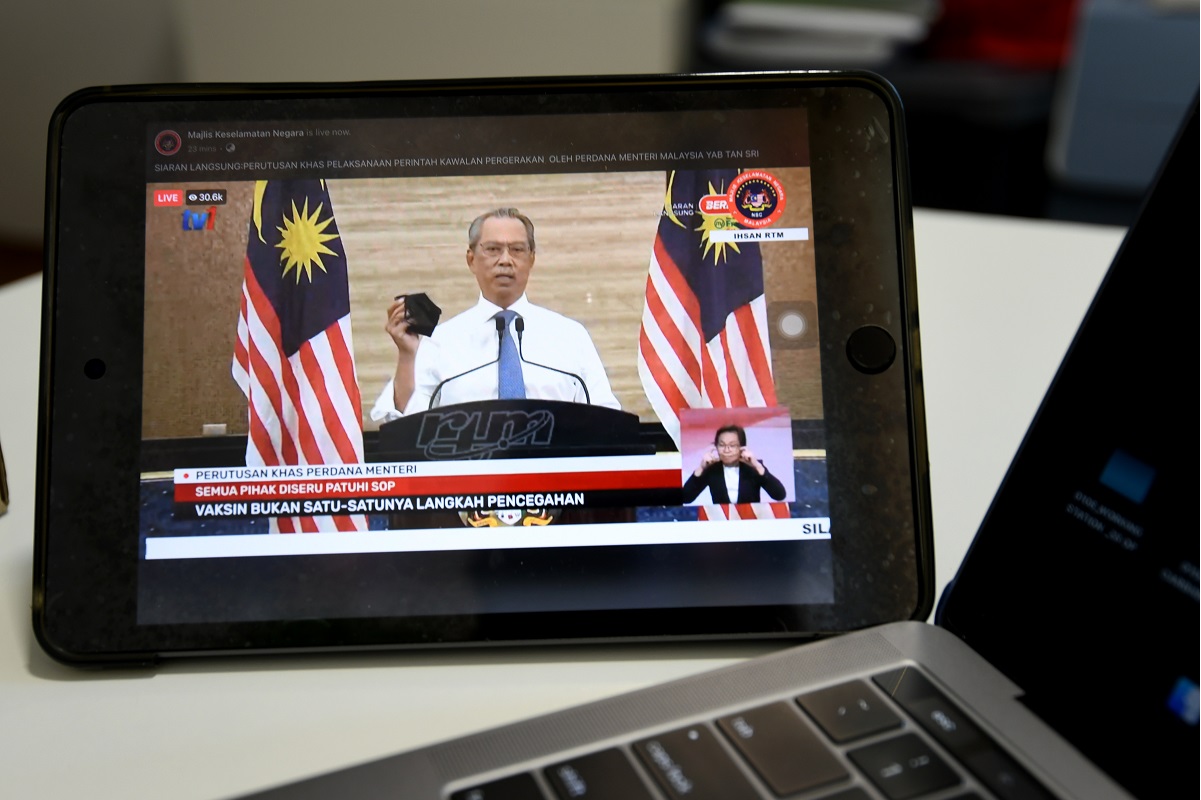 KUALA LUMPUR (Jan 11): The government has reinstated the Movement Control Order (MCO) in the states of Penang, Selangor, Melaka, Johor and Sabah as well as the federal territories of Kuala Lumpur, Putrajaya and Labuan for a two-week period starting Jan 13.

In a national address today, Prime Minister Tan Sri Muhyiddin Yassin said these states and federal territories are considered high-risk areas following a risk assessment as well as the evaluation of health services by the Ministry of Health (MoH).

“MoH will continue to undertake risk assessments to decide whether the MCO should end or be extended, before the two-week period is up,” he said.

The ban on interstate travel will also be reinstated, the prime minister said.

Under the MCO, social activities and gatherings, including weddings, conferences, religious processions and sports are also not allowed.

Movement is limited to a 10-km radius and is only allowed for the purchase of groceries from the nearby supermarket or grocery store.

Meanwhile, students who are supposed to take their SPM examinations in the 2020 and 2021 session are allowed to attend school, subject to strict standard operating procedures (SOPs) to be announced by the Education Ministry.

In terms of outdoor activities, those in the same household are allowed to exercise together, while maintaining a distance of two metres from others outside.

Only two people are allowed to jog together at the same time, while cycling is only limited to one person.

Eateries and hawker stalls will be allowed to operate but limited to take away orders, while dining in is not allowed.

On religious activities, Muhyiddin said only a maximum of five committee members of houses of worship will be allowed at religious premises.

The government will allow five essential economic sectors to operate, namely the manufacturing, construction, service, trade and distribution, and agriculture and commodities sectors.

Only 30% of workers within a company’s management group are allowed to be in the office, with employers to determine the number of workers required at their premises, subject to the SOPs, while non-essential staff will be required to work from home.

Those in violation of the rules can be subjected to a maximum fine of RM1,000 under the Prevention and Control of Infectious Diseases Act 1988.

Meanwhile, the Conditional MCO (CMCO) will be enforced in six other states — Pahang, Perak, Negeri Sembilan, Kedah, Terengganu and Kelantan — while Perlis and Sarawak will be under the Recovery MCO (RMCO) during the same period.

Eateries in these states will be allowed to operate as per usual.

Read also:
What is allowed under the MCO, CMCO and RMCO?
Phase 3 clinical study of Covid-19 vaccine from China to begin on Jan 21 in nine hospitals, says PM
PM: Nation's healthcare system is at breaking point
Ismail Sabri to announce MCO SOP on Tuesday