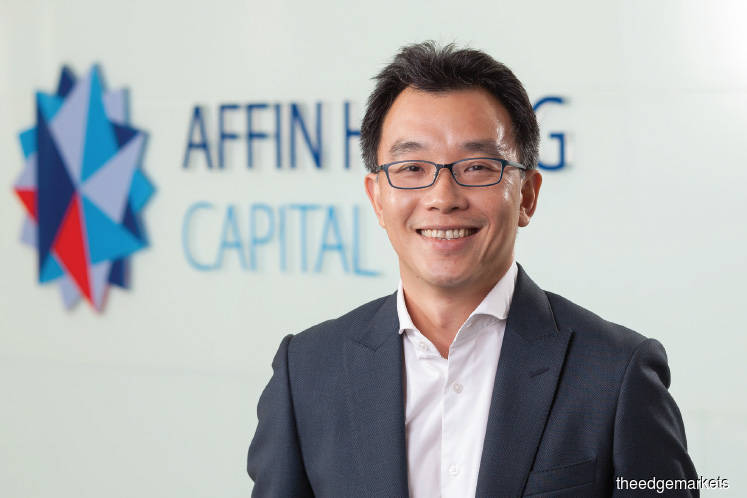 KUALA LUMPUR: From Melaka to Bandar Malaysia and further on to the East Coast, Chinese monies are expected to pour into Malaysia, though primarily in the form of loans from Chinese state-owned banks.

“The Malaysian economy does need Chinese presence. Our budget is in deficit. We have promised the investors to reduce the deficit over time, so we’re not in a position to spend big. That is the fiscal policy,” Affin Hwang Asset Management’s head of equities strategies and advisory, Gan Eng Peng, told The Edge Financial Daily in an exclusive interview.

“As for the monetary policy, in theory, if the interest rate is lower, it will be better for the economy to grow but we’re not in the position to do that because of the weakness of the ringgit. So, we’re tied as well.

“The third leg is China. [So] that is needed to stimulate some of the domestic economy but we need to be careful because a large part of it could be exported back out if the materials, companies, and even labour involved in these projects are Chinese players as well. But this (the flow of Chinese funds into the country) has not really started,” he said on concerns about the country’s over-reliance on China.

After the ground-breaking of the East Coast Rail Link (ECRL) project recently, the market is now waiting for new contract awards to be announced. While Malaysian contractors have been promised at least 30% of the works on the Chinese-financed project, the lion’s share will still likely go back to the Chinese under the deal, as China endeavours to export its overcapacity overseas.

“So far, for Malaysia giving contracts to Chinese contractors, we have seen plenty awarded — a look at our downtown skyline shows many buildings that are coming up are built by the Chinese.

“But as to Chinese giving monies to Malaysian entities, none of the announced projects have visibly started or appear to be taking off the ground, except for ECRL, which will only start work in 2018,” Gan observed.

He also noted that despite the promises of “investments” from China in several mega infrastructure projects, other than the ECRL, not much actual money has come in so far.

Of course, government-to-government deals differ from business-to-business ones, chief of which is the voluminous red tape involved.

“From our channel checks, they (mega infrastructure projects) have been delayed. Some couldn’t even get off the planning stage, let alone the award of contracts,” he said.

Other than the ECRL, among the mega projects that will possibly have high Chinese interest are Bandar Malaysia, the Melaka Gateway and the Kuala Lumpur-Singapore High-Speed Rail.

Nonetheless, Gan was convinced that the projects would materialise eventually, mainly due to geopolitical reasons.

As for the local equity market, Gan said the market was fairly valued and would require a new catalyst to drive it higher. There was a “tremendous amount of domestic liquidity” that was sufficient to support the market, despite the lack of catalyst, he said.

On elections, he said this boiled down again to certainty — in this case the certainty of who will win.

“If there are uncertainties in the election results, it will affect how people invest or spend their money. In Malaysia’s case, we have a bit more certainty now so [some] people wouldn’t mind putting their money to work, but it’s not aggressive. [So] in the run-up to the election, the market can be a bit soft because people may still be cautious of the outcome. Our base case is that it (the election results) will be status quo,” he said.

A market observer too agreed that the market will be more cautious with the upcoming general election, saying certain parties are holding back massive investment in case things change rapidly following the election.

Fitch Ratings, which last Thursday affirmed Malaysia’s long-term foreign and local-currency issuer default ratings at “A-”, with a stable outlook, noted that a general election, scheduled to be held before August next year, was unlikely to lead to a significant change in the direction of economic policy.

Standard and Poor’s, however, said in a statement in June that “ongoing political challenges in relation to the corruption allegations of 1MDB (1Malaysia Development Bhd), combined with the approaching elections, pose potential challenges to the sovereign rating over the near to medium term”.

Strong liquidity aside, Gan said another key positive was the country’s current strong economic growth, especially within the export sectors, which spurred the stronger-than-expected 5.8% gross domestic product growth in the second quarter of this year. However, the export sector was not heavily represented in the stock market, he said.

“With the overall improvement in the economy, there should be some legs to the banking names, selectively. Broadly speaking, rising global interest rates are good for banks,” he added.

As for the upcoming Budget 2018, which is scheduled to be tabled in less than two months, there doesn’t seem to be much expectations for it, said Gan.

“It will be a people’s budget but we are already at a deficit. [So] there isn’t much that could be done. Development expenditure will be for infrastructure spending. There is also not much room for operating expenditure. From our perspective, there is not much room for the government to manoeuvre. It shouldn’t be a catalyst but we [can] hope … maybe they can surprise us,” he added.