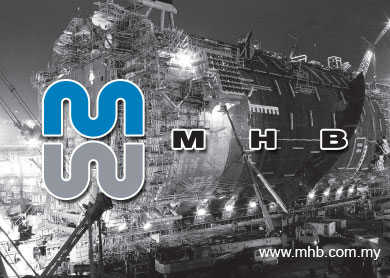 In a filing with Bursa Malaysia today, MHB said profit had risen mainly on deferred tax as both its offshore and marine segments registered lower profits. The offshore segment undertakes construction of oil and gas structures while the marine segment specialises in vessel repair.

MHB registered tax assets of RM19.04 million in 3QFY14 compared to tax expense of RM4.46 million a year earlier, according to the company's income statement.

Revenue, however, grew to RM2.19 billion against RM2.15 billion.

On prospects, MHB said it foresaw a challenging backdrop in the vessel repair segment due higher capacity in the region.

"The marine business unit faces stiff competition from increased vessel repair capacity in the region but medium term prospects remained favourable as the continued growth in the number of shipping vessels would provide a growing need for dry docking and marine repair services," it said.

For its offshore business segment, MMHE said it had been awarded a few new projects which were expected to contribute to the group’s financial performance in the coming financial year.

MHB is a 66.5% subsidiary of MISC Bhd, which in turn, is a 62.67%-owned unit of national oil company Petroliam Nasional Bhd.