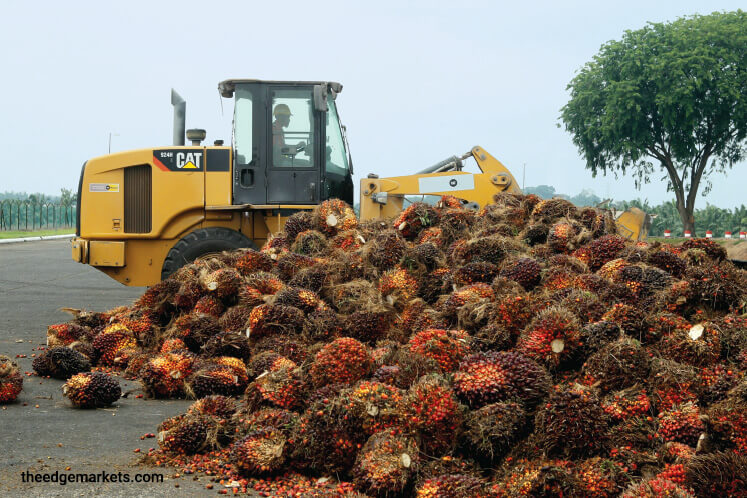 THREE weeks ago, prime minister Datuk Seri Najib Razak issued a warning to the European Union: a boycott of palm oil will lead to retaliation from Malaysia and Indonesia.

The statement was in response to a resolution of the EU Parliament last April, proposing to phase out the use of unsustainably produced vegetable oils in biodiesel from 2020, which is seen to target palm oil.

The prime minister’s declaration comes ahead of a joint mission from Malaysia and Indonesia to meet EU officials on the matter.

While reports say it was slated for last month, a spokesman for plantation minister Datuk Seri Mah Siew Keong tells The Edge that the joint mission is still in the preparatory stages.

For perspective, the EU received 12.8% of Malaysia’s palm oil exports last year, or about 2.06 million tonnes, according to the Malaysian Palm Oil Board. Indonesia shipped 4.3 million tonnes to the EU.

“In that sense, only Indonesia can wield the big stick due to its financial muscle.

“The question is, does Malaysia have that big of a stick on its own,” says Khor Yu Leng, an independent economist who specialises in sustainability.  “I definitely don’t put Malaysia in the same class as Indonesia in that regard. Moreover, Malaysia seems to be underinvesting in sustainability ideas, data and solutions (to report to big markets and buyers), whereas Indonesia is moving hard on this. ”

In addition, the apparent collaboration between the two nations — which collectively account for about 85% of global palm oil production — on the issue should not be taken as a given.

Past experience shows the two nations have not been able to coordinate very closely on strategic trade issues. Furthermore, Malaysia is more dependent on exports than Indonesia, the latter having a bigger domestic market to absorb excess palm oil supply.

“I don’t see a coordinated strategy really. Certainly, both countries can have common issues and some coordination may happen at a tactical level, but perhaps not at a strategic level,” Khor says.

The spotlight will be firmly on the joint mission as it may provide further clarity on how further negotiations may be conducted. Note that both Malaysia and Indonesia have been negotiating separate free trade agreements with the EU and the palm oil issue may reflect one facet of the negotiations.

Europe is already reducing its palm oil usage, for example in the food sector.

“Based on this reduction and cuts by the leading transport fuel companies, we could see a one-third to two-thirds reduction (from the resolution’s enforcement) depending on the end uses,” opines Khor.

One precedent could be the timber sector and the EU market. In 2003, the EU adopted the Forest Law Enforcement, Governance and Trade (FLEGT) action plan to prohibit the import of illegal timber or timber products into the EU.

Malaysia and Indonesia’s approach to dealing with the action plan were different, Khor says. While Indonesia negotiated a voluntary partnership with the action plan, and subsequently became the first country to issue FLEGT licences for timber exports, Malaysia did not.

“From what I hear, there is a difference of opinion among key people [in the palm oil industry] in Indonesia and Malaysia. I can’t say I have spoken to everyone, but certainly in Indonesia I get the impression that they are very keen to arrange a sort of a FLEGT kind of approach to palm oil, but in Malaysia I’m not hearing quite the same thing,” says Khor.

This means Malaysia should retain its options and prepare to negotiate on its own in respect of the EU resolution.

“I think Malaysia also has to directly negotiate their deal with the EU because it remains in question whether Indonesia and Malaysia can align on all issues due their competition for the market,” she says.

While there may be areas of joint interest, ultimately, both nations are competing for the same markets and in some, such as China, Indonesian exports have gained market share at the expense of Malaysian exports, says Khor.

An important way forward is to prepare a position paper that sets out legal arguments against the resolution’s proposals based on World Trade Organisation (WTO) trade rules, says trade lawyer Jason Teoh.

In a nutshell, the proposals within the resolution that raise concern are a single mandatory certification scheme, which singles out the palm oil industry as being unable to address sustainability issues via voluntary measures and policies alone.

The resolution also proposes to impose mandatory labelling on all palm oil products to reflect compliance with the aforementioned certification scheme. The requirements will not be made mandatory for other vegetable oils competing with palm oil.

However, these proposals are inconsistent with various WTO agreements.

Among others, the selective mandatory requirement on certification would mean palm oil-exporting countries are treated less favourably than nations exporting other vegetable oils, says Teoh, amounting to discrimination.

Additionally, the labelling requirement adds cost and difficulty to exporting palm oil to the EU, which are hardships not imposed on other vegetable oils. Both proposals would violate fair trade principles contained in the WTO’s General Agreement on Tariffs and Trade and the Technical Barriers to Trade Agreement.

“It is not clear that the requirements are necessary to achieve the objectives of protecting the environment and plant life or health,” says Teoh, referring to a 2013 report by the European Parliament’s Committee on Environment, Public Health and Food Safety.

The report had noted that other vegetable oil sources are more significant contributors to deforestation. The EU resolution passed in April acknowledged that simply phasing out palm oil may lead to replacement vegetable oils, which may have a greater impact on the environment.

Therefore, drafting a position paper should be a first priority for Malaysia, says Teoh. He adds that the paper should “clearly set out the legal arguments against the certification and labelling requirements and any factual inaccuracies in the EU Parliament’s resolution”.

The paper should also outline the negative effects of the requirements on the economy and development of the affected nations, says Teoh, as well as indicate Malaysia’s willingness to engage the WTO dispute settlement process should the proposals become law.

Such a position paper, sent to the relevant EU officials, would be a key leveraging tool as Malaysian negotiators engage their EU counterparts. On the corporate side, however, it is difficult to gauge the potential impact as yet, especially as not all listed Malaysian planters export to Europe.

What is clear is that engagement and negotiations will be crucial, according to Datuk Franki Anthony Dass, managing director of Sime Darby Plantation.

Sime Darby is the world’s largest producer of certified sustainable palm oil with about 18% CSPO market share in 2014.

Piling on more requirements in addition to numerous existing certifications “is very unfair to the palm oil industry,” Dass tells The Edge. “We need to go talk to them and tell them ‘look, we are doing a lot of things on the sustainable palm oil space’.”

He feels that if push comes to shove, the EU may adopt an existing certification such as the Roundtable on Sustainable Palm Oil with some EU-specific additions.

“For them to go and invent another certification, it will take longer than three years,” says Dass, adding that the core principles will come back to “no deforestation, no peat planting, upholding human rights, no child labour and so on.”