Malaysia, Indonesia and Thailand agree to trim natural rubber exports by up to 300,000 tonnes 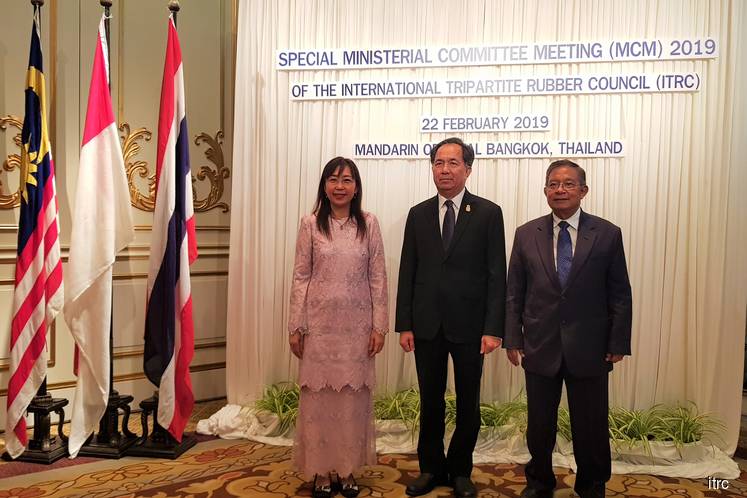 KUALA LUMPUR (Feb 22): Malaysia, Indonesia and Thailand — the three largest natural rubber (NR) producing countries in the world — agreed today to implement the Agreed Export Tonnage Scheme (AETS) to reduce natural rubber exports from their countries by 200,000 to 300,000 tonnes, in the face of depressed NR prices.

The decision was announced in a joint media release today by Malaysia's Primary Industries Ministry and its counterparts in the two other main natural rubber producing countries after attending the Special Ministerial Committee Meeting of the International Tripartite Rubber Council (ITRC) — of which the three countries are members.

They believe the AETS is an effective tool to address transient shock imbalances in the global NR market and have tasked senior officials of ITRC to discuss the details of the AETS implementation within two weeks in Thailand.

"On top of the forecast of 700,000 MT of its regular annual consumption, Thailand is implementing DPS project which would consume additional 270,000 MT of rubber. In addition to that, Thailand has been implementing its Strategic Market Operation through six physical rubber markets which has resulted in improved NR price in domestic market. With this operation, the trading volume of physical rubber in 2018 increased by 105,600 MT with the total value of US$225 million," the statement read.

Malaysia too would continue its rubberised road project. "The government has approved a RM100 million allocation for the maintenance and construction of roads using cup-lump modified bitumen in ports and industrial areas," the statement said.

In Indonesia, it said NR has been used in various infrastructure projects, like provincial and district roads throughout the country, railroad track dampers, road separators, bridge bearings and tyre retreading.

While the ministers acknowledged that NR price has been hovering at a low level throughout 2018 until early 2019 amid negative market sentiment and uncertainty in the global economy, they said they have been encouraged with the improved NR price globally since the middle of December 2018.

"The ministers expressed their hope that NR price would improve towards a remunerative level. With improved NR price, it would remain attractive for smallholders to plant and harvest," the statement read.

On that note, the three countries have been encouraged to accelerate replanting of NR as well as the planting of alternative crops.

The meeting was held in Bangkok, Thailand — the world's largest NR producer — and hosted by Thailand's Minister of Agriculture and Cooperatives Grisada Boonrach. It was attended by Indonesia's Coordinating Minister for Economic Affairs Darmin Nasution, and Malaysia's Primary Industries Minister Teresa Kok, with senior government officials and board members of the International Rubber Consortium, a company established by the three members of the ITRC.

At the meeting, the ministers also proposed the formation of an Asean Rubber Council, a platform for discussions on the development of the natural rubber industry and cooperation between ASEAN member countries and dialogue partners.

They also deliberated on the future direction of the Regional Rubber Market (RRM) as a futures market and the establishment of an arbitration centre to support the RRM.