Malaysia incurs up to RM11.62b a year in off-balance-sheet expenses 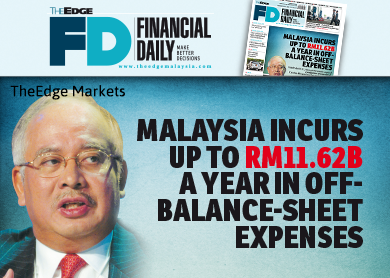 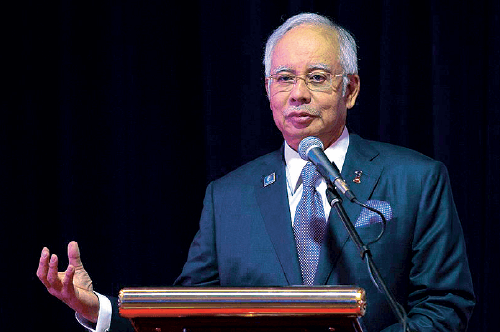 KUALA LUMPUR: Prime Minister Datuk Seri Najib Razak told Parliament that the government has to assume off-balance sheet obligations of between RM4.76 billion and RM11.62 billion a year for nine government-owned companies starting this year to 2020.

Off-balance sheet refers to items that are effectively assets or liabilities of a company or a government, but do not appear on their balance sheet.

“Until March 31, 2015, there are nine government-owned companies under the Ministry of Finance Inc (MoF) that have expenses classified as off-balance-sheet that are being borne by the government,” Najib, who is the Finance Minister, said in his written reply to a parliamentary question by Member of Parliament (MP) for Kulim Bandar Baru Datuk Abdul Aziz Sheikh Fadzir.

However, Najib, who is also the Finance Minister, did not reveal details of the usage of the money, which could cost the government over RM50 billion, by the nine government-owned companies.

Abdul Aziz had asked Najib to state the number of government-owned companies including Pembinaan PFI Sdn Bhd and Pembinaan BLT Sdn Bhd or any expense that is classified as off-balance sheet that is borne by the government and the amount paid monthly/annually for this purpose.

When contacted by The Edge Financial Daily yesterday, Petaling Jaya Utara MP Tony Pua deems the off-balance sheet expenditure as a “clear loophole for the government to spend well above what has been officially approved by Parliament in the Budget”.

“It would in effect mean that the official debt of the government is significantly understated to keep the figures below the 55% debt limit, and the budget deficit understated so as not to alarm the financial community,” he added.

Pua also said it is crucial for the government to exercise transparency in these off-balance-sheet items, which could be a major cause of a financial crisis when the global economic environment gets vulnerable.

PKR vice-president Rafizi Ramli said the figure disclosed in Parliament means that the off-balance-sheet liabilities of the federal government stand in between RM30 billion (minimum) and RM50 billion (upper estimation).

“This exposes the highest hypocrisy on the part of Najib. He justified all sorts of painful economic measures on the pretext of cutting deficit, yet at the same time he uses backdoor financing to amass government debts.

“It is totally unfair for the public to shoulder the burden of the goods and services tax (GST) when the additional revenue is unlikely to strengthen government’s finances when the off-balance-sheet commitment continues to swell like this,” he added.

Rafizi pointed out that the worst part is disrespect for governance, resorting to off-balance-sheet finances.

“My fear is this liability will one day go haywire the way 1MDB (1Malaysia Development Bhd) has gone — after all 1MDB is nothing more than a government’s vehicle to raise debts and to be spent without having to account for it in Parliament,” he noted.

Kelana Jaya MP Wong Chen said in the case of PFI, the off-balance-sheet payments may be related to a sale and leaseback of land arrangement.

Whatever the reasons behind this, he said the government must now itemise every single company and fully disclose the nature and status of these debts.

“We also need to scrutinise the impact of these payments in relation to the overall fiscal position of the government,” he added.

Separately, Najib told Parliament that he does not get paid any fees, gratuity or annual remuneration for his position as the chairman of the advisory board of 1MDB.

“The chairman of the 1MDB advisory board is not paid any annual remuneration or takes any fee, gratuity or interest,” Najib said in his written reply to Kampar MP Dr Ko Chung Sen.