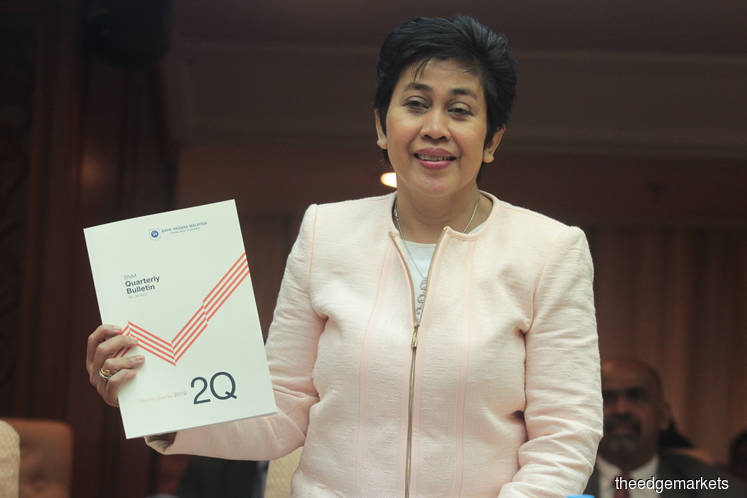 This is compared with gross domestic product (GDP) growth of 4.5% in 1Q19 and 2Q18 respectively.

Speaking to reporters here today, BNM governor Datuk Nor Shamsiah Mohd Yunus said all economic sectors expanded, with the mining sector registering its first positive growth since 3Q17 at 2.9%, versus -2.1%, due to recovery in natural gas output following the pipeline disruptions in 2018.

"Growth in the manufacturing sector also improved on the back of better performance of the domestic-oriented industries, while growth in the construction sector was slightly higher due to improvements in the residential and special trade sub-sectors," said Nor Shamsiah.

On the demand side, she said GDP growth is supported by the continued expansion in private sector spending, as well as higher net export.

She also noted that private consumption growth remains firm at 7.8%, while household spending is lifted by real wage growth of 3.6%, which is still above the recent average of 3.1%. "Government measures such as the Aidilfitri special assistance and Bantuan Sara Hidup also provided some lift to overall household spending in the current quarter," said Nor Shamsiah.

Private investment expanded by 1.8% in 2Q19, driven by higher capital spending and the manufacturing and services sectors, she said.

However, moving ahead, she said investment activity will likely remain subdued amid continued headwinds from global uncertainties and persistent weakness in the property market.

Looking ahead, the central bank is retaining its 2019 Malaysia GDP projection of between 4.3% and 4.8%.

Nor Shamsiah said the Malaysian economy is expected to remain on a steady growth path underpinned by the continued strength in private sector activity, amid the slower global growth due to the ongoing trade tension.

On headline inflation, she noted that it increased to 1.5% in June 2019 and is expected to average higher in the second half of 2019 following the lapse in the impact of zerorised goods and services tax (GST).

Nonetheless, she noted that the underlying inflation is expected to remain stable, supported by the continued expansion in economic activity in the absence of strong demand pressures.