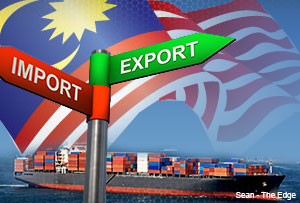 According to the Statistics Department statement today, imports grew 7.6%  to RM60.02 billion from RM55.78 billion. The export and import figures translate into a trade surplus of RM3.86 billion.

According to the department, export growth was underpinned by higher transactions of manufactured and mining goods.

The rise came mainly on higher exports of products including electrical and electronic (E&E) besides chemical products. E&E products were valued at RM21.5 billion, which accounted for 33.7% of total exports.

However, exports of agricultural goods decreased 1.6% to RM5.67 billion due mainly to lower exports of crude natural rubber attributed to both lower price and volume, while palm oil exports was affected by lower volume.

In geographical terms, Malaysia’s exports to the Association of Southeast Asian Nations region, Japan, the European Union and US rose.

Higher exports to these destinations had mitigated the impact of lower sales to China.

Major imports were E&E, besides petroleum and chemical products.

August y-o-y export growth of 1.7% had beaten a median market forecast of a 1.4% decline, based on an Reuters survey. Import growth of 7.6% was higher than the polled estimate of a 0.9% rise.